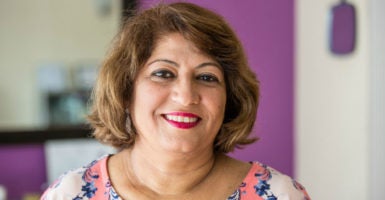 In 1985, Lata Jagtiani immigrated to New York City from India with a dream to be her own boss by opening her own salon. But because money was tight, Jagtiani made ends meet by working as a bookkeeper for various New York businesses before becoming a stay-at-home mom.

While raising her two children, Jagtiani continued to dream of opening her own business. The New York weather was tough on Jagtiani and her husband, so when they had the opportunity to relocate in 1995, they headed south.

The family of four had friends in Louisiana, so Jagtiani and her husband opened a T-shirt shop on Bourbon Street, New Orleans. Although the business took care of her family’s financial needs, Jagtiani had a skill she felt the city was lacking: threading.

As a young girl, Jagtiani’s older cousin taught her the ancient Indian art of threading, a technique used to precisely remove hair with the twisting of a thread.

In 2012, Jagtiani’s dream of being her own boss was fulfilled when she opened Threading Studio & Spa in Metairie, Louisiana.

But when Jagtiani opened her studio, she wasn’t aware of the local licensing laws put in place that would restrict her from doing her job.

Louisiana threaders began the battle against costly licensing in 2010 when the state added the practice of threading under the category of esthetics, a highly regulated and licensed trade in many states. This means anyone who practices threading must acquire an esthetician’s license or face thousands of dollars in fines and unemployment.

“I opened in 2012 and I didn’t know about the regulations. It [cost] me a lot. I didn’t know I needed a license to do anything but threading. The inspectors started coming in and asking me to get a license,” Jagtiani told The Daily Signal in a phone interview.

Jagtiani and former employees Ushaben Chudasama and Panna Shah are suing the Louisiana Board of Cosmetology for infringing upon their right to earn an honest living.

According to the Institute of Justice, a public interest law firm representing Jagtiani and her former employees, interpretation of the Louisiana Constitution, every citizen has the right to earn an honest living without “irrational government interference.”

Salim Furth, macroeconomics research fellow at The Heritage Foundation, told The Daily Signal in an email:

What Louisiana ought to do instead is to elevate its basic treatment of economic rights. Whether in the right to work as a threader or the right to build on one’s own land, the state should not be able to infringe on citizens’ economic rights without proving that the government has an important interest that cannot be achieved through less intrusive means.

“They don’t even teach threading over there. They were teaching waxing and facials, but I don’t want to do that. I want to do threading and that’s about it,” Lata Jagtiani says.

In order to receive a license, students must complete 750 hours in a cosmetology program, says the law firm. Jagtiani said these programs cost around $12,000 and take six to eight months to complete but do not teach students how to thread. “It was all science classes,” she said, disappointed in the irrelevance of her mandatory schooling.

Of the 750 hours required, approximately 250 hours “are for sanitation, health and cleanliness, and all of these other things that we must teach for people to run a healthy and clean shop,” said Stephen Young, director of the Louisiana State Board of Cosmetology and a defendant in the lawsuit, according to The Associated Press.

“They don’t even teach threading over there. They were teaching waxing and facials, but I don’t want to do that. I want to do threading and that’s about it,” Jagtiani added. “I tried to get a license, I went to school. I couldn’t finish it because I didn’t have the time with my other business.”

Paul Larkin, senior legal research fellow at The Heritage Foundation, told The Daily Signal in a phone interview: “I cannot imagine a legitimate reason for all of the unecessary training required by Louisiana. This is a classic instance of the government abusing its authority to injure the public by protecting a cartel.”

The Louisiana Board of Cosmetology also has a conflict of interest when it comes to the local regulations, Furth argued in his email to The Daily Signal:

Louisiana shows what happens when regulation is allowed to run amok. The chair of Louisiana’s Board of Cosmetology actually owns and operates her own beauty college, so [Frances Hand] has a personal financial interest in extending the reach of cosmetology to cover more workers. Giving a businesswoman the right to regulate her own industry is pure crony capitalism. Louisiana voters should demand that customers, not industry insiders, should be in charge of regulating (or deregulating) occupations in the state.

Giving a businesswoman the right to regulate her own industry is pure crony capitalism,” @salimfurth says.

The Daily Signal reached out to Hand, owner of Denham Springs Beauty College, for comment, but she did not respond.

Meagan Forbes, the attorney at the Institute for Justice representing Jagtiani, said threading is a “simple technique that just involves a simple strand of thread—it’s not invasive. There’s no skin to skin contact even between the practitioner and customer.”

Furth added to the fact that an unskilled threader does not pose any threat to society. “In full disclosure, I actually had my eyebrows threaded once, purely by accident. It stings if it’s done right; an incompetent threader would just end up with a mess of string on her own hands.”

“My customers were so happy. They don’t want me to close, they want to come back to me for threading. They are so happy with threading they don’t want to do waxing. I had so many clients, and now they are so miserable,” Jagtiani said.