After Nice, France Grapples With How to Combat Terrorism 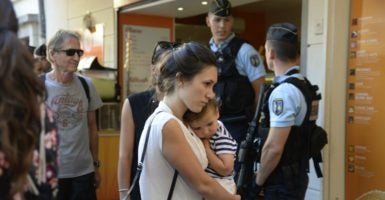 France has suffered three mass-casualty terrorist attacks in the past 18 months. For many French citizens life under the day-to-day threat of terrorism has become the new normal. (Photo: Jerome Mars/JDD/SIPA/Newscom)

KYIV, Ukraine—The terrorist attack in Nice spurred finger pointing among France’s political elite about insufficient security during Bastille Day celebrations, as well as a sober acknowledgment that the threat of radical Islamist terrorism has become a day-to-day reality for life in France.

The attack, which killed 84 along the French Riviera on France’s independence day, July 14, has challenged the political discourse in France on how to combat terrorism. Focus has partially shifted away from eliminating terrorism’s root causes toward finding ways to effectively mitigate the terrorist threat through better security.

“We could refuse to look reality in the face, forget, and move on to something else.” French Prime Minister Manuel Valls said in an interview published in French media on Sunday. “But I owe the truth the French people—terrorism will be part of our day-to-day life for a long time.”

The January and November 2015 terrorist attacks in Paris sparked diverse debates in French government halls and editorial pages about how to fight terrorism.

The discourse focused on integrating France’s marginalized Muslim population, granting extraordinary powers to French intelligence services and law enforcement, and the efficacy of airstrikes in Iraq and Syria to counter the Islamic State threat to the French homeland.

In contrast, after the Nice terror attack some French politicians immediately accused French President François Hollande and his government of not doing enough to keep the country safe and questioned whether security was too lax in Nice during Bastille Day celebrations.

‘I owe the truth the French people—terrorism will be part of our day-to-day life for a long time.’ —Prime Minister Manuel Valls

Many are consequently painting the Nice attack primarily as a security failure rather than a symptom of French societal schisms or military policies abroad.

“How was this lorry able to enter a secure pedestrian area? The investigation will no doubt demonstrate that the security measures were insufficient,” Christian Estrosi, president of the Nice Regional Council, told reporters on Saturday.

Former French Prime Minister Alain Juppé told reporters on Saturday, “If all the precautions had been taken, this drama would not have taken place.” Italian Piero Massardi shows a picture of his wife Carla Gaveglio, who is still missing after the terrorist attack on Bastille Day at the Promenade des Anglais in Nice, France. (Photo: Irina Kalashnikova/SIPA/Newscom)

In a separate interview published in Le Parisien, a French newspaper, on Sunday, Juppé said: “I’m not stirring controversy with anyone. I understand how difficult the task is, but fatalism is not a policy. We can do more and better, even if, of course, zero risk does not exist.”

“Some irresponsible politicians say that the attack was avoidable,” Valls said in an interview with French media published Sunday. “But zero risk does not exist. To say the opposite is to lie to the French people.”

France has suffered three mass-casualty terrorist attacks in the past 18 months. For many French citizens life under the day-to-day threat of terrorism has become the new normal.

In January 2015, terrorists killed 17 across Paris, including 12 in a shooting at the office of the satirical newspaper Charlie Hebdo and four at a Jewish kosher supermarket.

After the January attacks Hollande launched Operation Sentinelle, the domestic deployment of about 10,000 troops to patrol French streets, with an emphasis on protecting high-risk targets such as synagogues and schools. It was the first large-scale peacetime deployment of troops on French soil in the army’s history.

By April 2015 Hollande had scaled back the operation to 7,000 total troops, but bumped the number back up to 10,000 after the November attacks.

At first, the sight of French troops patrolling French streets in combat formation and in full combat kit with weapons drawn was jarring for both French citizens and tourists alike. But after 18 months, the armed patrols are no longer exceptional, underscoring how French society is adjusting to the realities of life under the heightened threat of terrorist attack.

After the terrorist attacks in Paris on Nov. 13, which killed 130, Hollande declared war on the Islamic State, retaliating both at home and abroad.

“We’re at war against jihadi terrorism,” Hollande said in a Nov. 16 speech to the Congress of the French Parliament.

In the weeks that followed, the French president undertook a marathon transcontinental diplomatic blitz to rally world leaders to escalate the military effort against ISIS in Syria and Iraq. A couple walk through the empty flower market in the old city and near a sign that reads, “Pray for Nice” days after a terrorist attack on the Promenade des Anglais on Bastille Day killed scores and injured as many in Nice, France. (Photo: Eric Galliard/Reuters/Newscom)

After the November attacks Hollande also placed France under a state of national emergency, which authorized a countrywide security crackdown and granted extraordinary powers to law enforcement and intelligence services to make arrests, conduct searches, and shut down mosques with suspected radical ties.

In a televised address in the predawn hours Friday following the Nice attack, the visibly shaken French president announced he would prolong France’s state of emergency, which was set to expire on July 26, by three months.

“We live in a changed era,” Valls told French media. “France will have to live with terrorism. But France is a great democracy that will not be destabilized.”

Hollande’s extension of the state of national emergency was widely accepted among French politicians, although some questioned whether it would be enough to counter the growing threat.

French Senate President Gérard Larcher said on Sunday that he supported prolonging Operation Sentinelle, but added: “The state of emergency and national unity cannot be the only responses each time an attack happens. The French people expect more from the president of the Republic and from the government.”