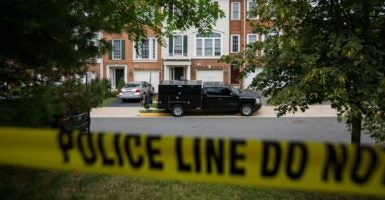 Authorities arrested an officer with the Washington Metro Transit Police Department on Wednesday for attempting to provide material support to the Islamic State, or ISIS.

While this may be the first U.S. police officer charged with aiding ISIS, in the past there have been both civilian and military personnel who have given material support and/or actively plotted to attack the U.S. in support of Islamist terrorist purposes.

Nicholas Young, 36, has been a police officer with the Washington Metropolitan Transit Authority since 2003. Police arrested Young after he allegedly attempted to supply ISIS with gift cards to be used to pay for mobile messaging applications. However, his overseas ISIS contact was in fact FBI personnel posing as an ISIS supporter. Young had actually been on the FBI’s radar for several years now.

In 2010, Young was first interviewed by the FBI after an acquaintance of his was arrested for providing material support to another terrorist organization, al-Shabaab. Not long after, an undercover FBI officer would meet with Young and Amine El Khalifi to talk about marksmanship and postings of propaganda on Facebook.

Less than a year later, Khalifi was arrested for attempting to attack the U.S. Capitol with guns and a bomb. Amine El Khalifi is the 54th Islamist-inspired terror attack on The Heritage Foundation’s Terror Timeline.

However, before the arrest of Khalifi, Young was interviewed again by the FBI. This time in connection with two trips he had taken to Libya in 2011. Both supposedly to fight with rebels in an attempt to overthrow Muammar Qaddafi.

In 2014, Young began meeting with another FBI confidential source. In concurrence with this investigation, it was found that Young was in possession of a number of weapons including several types of AK-47 rifles, an 8mm rifle, a .45-caliber pistol, and a World War II-era Russian rifle.

In June 2015, Young was also interviewed by law enforcement on allegations of domestic violence where it was learned Young had once dressed up as “Jihadi John” for Halloween, and once before as a Nazi.

From the criminal complaint it can be inferred that Young has had a long history of paranoia and violent tendencies. With his past connection to supporters of terrorist organizations, along with his police training and stash of weaponry, it’s fortunate he was arrested on material support and not after possibly causing harm.

It’s relieving to know the intelligence community was keeping tabs on Young’s suspicious activities, and they were able to make a prompt arrest after Young’s actions had been considered unlawful.

With the growing correlation between the number of plots and/or attacks on the U.S. with the growth of ISIS, the U.S. must do more to defeat ISIS abroad if it is to deal with Islamist terrorism at home. Congress must also ensure law enforcement and the intelligence community have the resources necessary to apply to cases such as this.