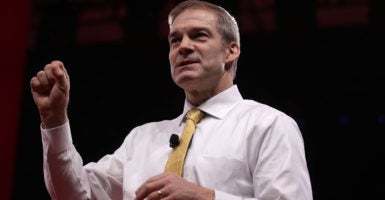 Rep. Jim Jordan, R-Ohio, decries what he calls the political "double standard" of justice from his perch on the House Oversight and Reform Committee. (Photo: Alex Wong/Getty Images)

The former chairman of the conservative House Freedom Caucus says his mission now as ranking member on the House Oversight and Reform Committee remains the same, even though Republicans are no longer in the majority.

“The focus is the truth and making sure the American people understand what happens when we get to the truth when there’s any type of investigation going on,” Jordan said on the second installment of the House Freedom Caucus’ new podcast, hosted by Rep. Jody Hice, R-Ga.

“There’s the broader issue of, we do want the government that Americans are taxed to support. We want it to work efficiently and effectively, so that’s the charge of the committee, if you will. I have always enjoyed being on the committee. I feel privileged to have the role we have now,” he said.

Jordan made his remarks on the new “Freedom Caucus Podcast,” which debuted last week, with Hice interviewing the current caucus chairman, Rep. Mark Meadows, R-N.C., about the group’s founding and its continued influence in the 116th Congress.

In the latest podcast, Jordan—who was named the oversight panel’s ranking member in November after Democrats retook control of the House in the midterm elections—said that he detests what he called the “double standard” of justice he sees in the American political system and wants to work to correct it.

“It’s not what this country’s about, this idea that there’s two sets of rules now, one set of rules for us regular folk … but a different set if you are part of the politically connected class—if your name is Clinton, [Michael] Cohen, [former IRS official Lois] Lerner, [former Attorney General Loretta] Lynch, [former FBI official Lisa] Page, [former FBI official Peter] Strzok, all these people we have heard about. If your name is that, it’s different,” Jordan said. “That is not how it is supposed to be in this country. It is supposed to be equal treatment under the law.”

Jordan referred specifically to former IRS division chief Lois Lerner, who reportedly targeted tea party groups and “admitted that the agency put additional scrutiny into the applications for nonprofit tax status of conservative and tea party groups,” according to NPR.

“It’s as wrong as it gets, and you know I feel like the oversight function of the United States Congress is to make sure that that kind of stuff doesn’t happen—that it’s equal treatment for all, and it’s equal treatment under the law,” the Ohio lawmaker said. “That’s why we gotta fight and make sure we expose the wrongdoing when it in fact happens.”

While Jordan said his focus on the House Oversight and Reform Committee will be to pursue the truth, he said he thinks Democrats will be focused solely on partisan attacks on President Donald Trump.

“I do think what is going to happen this Congress, and you’re already seeing it, the Democrats are going to spend their time investigating the president,” the seven-term lawmaker said. “They are so focused on getting the president, in my mind, way too focused on that, and not focused on helping the country. But I don’t see them changing.”

Listen to the full podcast below: