With a Domestic Economy Slowing Down, China Doubles Down on Foreign Investments 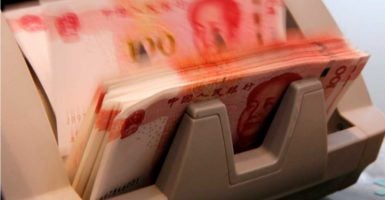 China is the world’s largest exporter of merchandise. What is not well known: it is the world’s second largest net creditor nation, increasingly acquiring western companies and technology.

According to the China Global Investment Tracker from the America Enterprise Institute and The Heritage Foundation, Chinese global outbound foreign direct investment (defined as having at least a 10 percent ownership in a foreign enterprise) set a record level in the first half of 2016, exceeding its full-year total from just four years ago.

The investment tracker documented almost $90 billion of investment in the first six months of 2016, more than any full year prior to 2013 and a 39 percent rise over a record pace in the first half of 2015.

According to Derek Scissors, the creator of the global investment tracker now with the American Enterprise Institute, the surge in Chinese outbound foreign direct investment was mostly from acquisitions by private Chinese firms.

The China investment tracker includes all verifiable investment and construction transactions worth $100 million or more. It tracks mainland Chinese funds moving through Hong Kong to their final destination and is therefore more accurate in determining national totals.

With the Chinese economy slowing in recent years, and with many of its basic industries such as steel, cement, and even solar panels operating at significant levels of excess capacity, China is no longer attracting the levels of inbound foreign direct investment as in recent years.

And with indigenous innovation lacking, China’s corporate “go global” campaign is gaining momentum. Foreign direct investment into China increased only 6 percent in 2015 while outbound investment by Chinese companies grew by 15 percent and hit a record high of $120 billion in 2015.

Until a few years ago, Chinese outbound investment was almost exclusively dominated by large state-owned enterprises whose focus was largely energy, land, and mineral acquisitions throughout the developing world. While energy outbound direct investment still remains important, more recently state-owned enterprises have been investing in more “upscale” assets in the developed world.

According to the China Global Investment Tracker, the largest recipient of Chinese direct investment was the U.S., which witnessed its full-year record for investment nearly double in just the first half of 2016 to about $35 billion. Access to technology has recently been the major driver of Chinese acquisitions in the U.S.

Given the complexity of the U.S.-China relationship, there are concerns about the impact of Chinese investment on our nation’s security. Fortunately, we have a process in place to take care of that.

The Committee on Foreign Investment in the United States, which evaluates the possible national security threats from foreign acquisitions, has allowed almost all Chinese acquisitions (with a few notable exceptions) across a broad range of sectors showing that Chinese investments appear benign in their direct impact on American security.

And the impact on the American economy is positive. According to a report by the National Committee on U.S.-China Relations and Rhodium Group, the number of Americans employed by Chinese-affiliated companies rose by 12 percent to 90,000 in 2015. This is an increase of just 10,000 from 2009. The Chinese invest so much in the U.S. because relative to all other places in the world it is a good environment. It can and should be made better. But even as is, the Chinese benefit greatly from these investments. And it is very important to note, so do Americans.