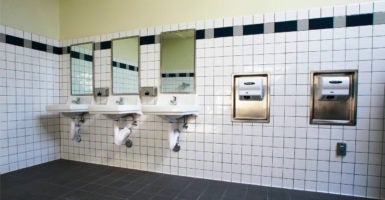 Parents in a Washington suburb say their school board has cut them out of the process of implementing new guidelines for accommodating transgender students.

The school board in Fairfax County, an affluent suburb in Northern Virginia, has scrapped a public forum on the gender identity policy and scheduled a work session in which parents aren’t allowed to participate. It isn’t clear when or if parents will have an opportunity to weigh in.

The Fairfax County School Board “released regulations with no parental input—nothing from the taxpayers—so I’m really upset,” said Bethany Kozma, a mother who is calling for greater transparency from her elected officials. “It’s a free-for-all.”

Pat Hynes, the school board chairman, gave members a copy of the gender identity and sexual orientation regulations on July 1, the Friday before the Fourth of July weekend. According to emails obtained by The Daily Signal, Hynes received the regulations from the school district’s division counsel.

The school district has not posted the guidelines online, nor formally notified parents.

However, a group called Fairfax County Public Schools Pride, which describes itself as “an allied and LGBT community” for employees of the school system, made the regulations public on its website and said “these are now in force.”

“The finalized version of the regulations about treating trans and gender nonconforming students with dignity and fairness were released July 1,” the FCPS Pride website says. “We have been told that these are now in force, although the [school board] will decide how it wants to review them (whether by email or in a work session).” The Daily Signal obtained a copy of the new gender identity and sexual orientation guidelines from Elizabeth Schultz, one of three school board members who oppose them.

The rules also instruct teachers and staff to call students by their preferred name and pronoun. They offer any transgender or gender nonconforming student the option of convening a “support team” consisting of the student’s parents, classroom teachers, administrators, school counselors, school psychologists, school social workers, or other appropriate staff.

Schultz, whose children attend county schools, is not just critical of the regulations but of the process nine of her fellow school board members are employing to implement them.

“Parents, students, and employees have yet to see plans or be publicly heard regarding, at a minimum, the implications of opening access in student and employee restrooms, locker rooms, and showers in school and administrative facilities,” Schultz told The Daily Signal.

Fairfax County parents’ unhappiness with how their elected school board has implemented a gender identity and sexual orientation policy in the district’s 196 schools and centers is something of a cautionary tale for school districts across the nation grappling with the same issues. At schools in Minnesota, Illinois, and Washington state, similar debates are playing out.

When Hynes, the board chairman, emailed the regulations to the board July 1, she requested a “forum” be held July 14 to discuss how the board should proceed. Schultz said the board scheduled the forum, which is typically open to the public, in a classroom with limited space, although the board typically holds such meetings in an auditorium and streams them online.

Three days before the forum—and after parents widely circulated emails calling on others to attend to voice their opposition to the regulations—Hynes withdrew her request for a forum in an email to the board, Schultz said.

Instead, Hynes proposed to hold a work session July 21, which, according to Schultz, provides no opportunity for parents or others to participate or comment.

“The development and status of these crucial regulations has generated intense public interest but little public engagement,” Schultz told The Daily Signal, adding:

Notably, work sessions of the board involve no public participation or engagement, so a work session does not resolve the issue of public engagement on the imminent and practical implementation of the regulations. It is unfortunate that once again, there appears to be a less-than-transparent process as the board conducts business in such a way that the very public we are elected to serve feels authentically informed and educated.

The Daily Signal sought comment from Hynes by email, but she did not reply before publication of this article. In an interview last week with Fairfax County Times, the board chairman appeared to understand why some board members and parents called for transparency.

“There are people in the community, particularly parents, who have questions about what it might mean for their children,” Hynes said of implementing the policy, adding, “[We] have an obligation to answer those questions so that parents have the information they need to understand what’s going on in their kids’ schools.” “My child’s safety and security and privacy is also at stake here,” a mother says. (Photo: Spaces Blend Images/Newscom)

Robert Rigby, president of the FCPS Pride employee group and a teacher at West Potomac High School in Alexandria, told Fox 5 DC (WTTG-TV) in an interview that he expects the new guidelines to have a “tremendous impact” on making Fairfax County schools “more welcoming to all kids, especially trans kids.”

Some parents, however, are more concerned about how the new regulations will affect nontransgender students.

“When transgenders and gays and lesbians get up there and say, ‘I was bullied,’ that’s wrong,” Kozma, a Fairfax mother of three who also opposes similar policies at the national level, said. “They should not be bullied.”

Kozma said she doesn’t fear transgender students, but rather, people who might abuse policies that allow people of the opposite biological sex into her daughter’s restrooms and locker rooms.

“My child’s safety and security and privacy is also at stake here,” she said.

Rigby addressed some of those concerns in his television interview, saying, “Some friends of mine with daughters have expressed concern about what about the yahoos, what about the troublemakers, what about the bad actors, and what we find is that no one ever has pretended to be trans to have access.”

The issue arose in May 2015, when the Fairfax County School Board voted to add gender identity and sexual orientation as protected classes under the school system’s nondiscrimination policy.

At that point, the school board made no decisions regarding accommodations to carry out the policy, such as allowing students to use bathrooms and locker rooms that correspond to their gender identity instead of their biological sex. It did agree to review the resulting regulations.

Instead, the board hired an outside consultant to “assist in developing appropriate regulations that protect the rights of all students,” Tamara Derenack Kaufax, then board chairman, wrote last year in a public statement.

As a consultant, Schultz said, the school board picked Jeffrey M. Poirier, until January a principal researcher at American Institutes for Research, a Washington nonprofit that bills itself as a behavioral and social science research and evaluation organization.

Poirier’s work there included “supportive services for LGBTQ youth and families,” according to his résumé. LGBTQ stands for “lesbian, gay, bisexual, transgender, and queer.”

Schultz scolded fellow board members for going “straight to someone whose entire mission it is to get these practices deeply embedded” in schools. She said she doesn’t plan to back down in her attempt to better inform parents of what she considers shady school board practices.

A former board member, Elizabeth Torpey Bradsher, appeared to agree, writing in a scolding letter to The Connection Newspapers published July 12:

The board has hit a sensitive nerve with their constituents and parents on this issue and now prefers to shy away from additional media controversy and discussion. In fact many parents are unaware the transgender policy is being brought forth again at a school board forum on July 14, which proves excellent planning on the board’s part.

The month of July is a wonderful time for controversial issues, the timing takes advantage that a large majority of parents and residents are gone on vacation; therefore it is easier to pass motions and generate policies. After such, the board will go into recess and all controversies will seem to be forgotten due to a lack of media attention. Thus there is little vocal objection from the public or notice.

The forum Bradsher mentions is the one that was canceled.

Up until a few weeks ago, Kozma said, she was one of those parents who were unaware of the transgender policy debate playing out in her own backyard. In part, however, she faults herself.

“This whole thing has taught me that I have to stay engaged on things that I didn’t think were important,” Kozma said. “If I’m going to be a good mom, I need to be engaged and informed about what’s going on in all aspects.”

This report has been modified to correct the spelling of Jeffrey M. Poirier’s name and the number of schools in the Fairfax County school system.