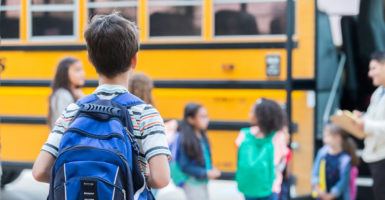 "Policymakers must be humble in their assumptions about what parents want in their children’s schools, and about their ability to drive quality through regulations," writes Lindsey Burke. (Photo: asiseeit/Getty Images)

What is the measure of a good school? And who is best positioned to decide what works?

For decades, policymakers and education officials have attempted to bolster school “accountability” by increasing regulations on schools across the board—public, charter, and private. They have tried to do so at the federal level for half a century, with federal intervention in K-12 education hitting a high-water mark under the Bush administration’s No Child Left Behind policy and the Obama administration’s attempts to pressure states into adopting Common Core.

Yet ever-increasing government intervention in schooling has had little positive impact on education outcomes writ large. Math and reading achievement outcomes have been largely stagnant since the 1970s for high school seniors, while graduation rates have seen only modest improvements (and even those figures may be artificially inflated).

It’s no surprise, then, that families have been looking for alternatives to geographically-assigned district schools. Twenty-nine states and the District of Columbia have begun to offer alternatives, enacting private school choice options such as vouchers, tax credit scholarships, and education savings accounts.

Although the education choice landscape is growing, government officials who take a heavy-handed approach to regulation threaten its long-term success. Instead of freeing traditional public schools from bureaucratic red tape that has tied the hands of educators and stifled innovation, some policymakers want to expand that top-down regulatory approach to the growing private school choice sector.

Take, for example, the Louisiana Scholarship Program, which provides vouchers to eligible families to enroll their child in a private school of their choice. In order for private schools to participate, they must adhere to a host of government regulations, including the requirement that all students on a scholarship take the same standardized test administered to public schools in the state.

Some private school principals have been concerned that regulations like this would drive school curriculum, thereby discouraging schools from participating. Indeed, just one-third of private schools in Louisiana participate in the program, and an experimental evaluation found that participation in the program had a negative effect on student academic achievement.

We are now beginning to better understand the way regulations affect private schools’ willingness to participate in private school choice programs. We are also seeing that Louisiana’s “accountability” measures had unintended consequences, and that could happen elsewhere.

Along with Corey DeAngelis of the Cato Institute and Patrick Wolf of the University of Arkansas, we recently released the first experimental evaluation of the effects of various regulations on the willingness of private school principals to have their school participate in a hypothetical voucher program. We randomly assigned one of three different regulations—or no government regulation—as part of school participation in a hypothetical voucher program.

At the same time, requiring participating private schools to administer a standardized test to their students decreased the likelihood that private school leaders were “certain to participate” by around 11 percentage points.

Standardized testing requirements appear to depress private school participation in school choice programs, which could partly explain what has transpired in the Louisiana Scholarship Program. High-quality private schools, as measured by tuition and enrollment growth, may have decided that the regulatory burden exceeded the benefits of participating in the program, and as a result, remained on the sidelines of the Louisiana Scholarship Program.

Although a growing body of literature is demonstrating that regulations on school choice programs generally correlate with lower rates of program participation, testing mandates—which in the hypothetical Florida experiment reduced school participation by 44 percent—are particularly notable for what little value parents place in them.

EdChoice recently released the results of the largest survey ever conducted of participants in a private school choice program. Parents participating in Florida’s tax credit scholarship program were asked to list the top three factors that influenced their decision to have their child attend their chosen private school. Only two factors—religious environment and instruction (66 percent) and morals/character/values-based instruction (52 percent)—were selected by a majority of scholarship parents.

Not only were families overwhelmingly satisfied with the tax credit scholarship program—92 percent of scholarship families reported being satisfied—but it is clear that Florida parents are choosing their child’s private school because those schools offered what their public schools either could not or would not.

So what do all of these findings mean?

At the very least, they suggest policymakers must be humble in their assumptions about what parents want in their children’s schools, and about their ability to drive quality through regulations.

A growing body of evidence suggests regulations, including standardized testing mandates, can depress school participation in private school choice programs. At the same time, while such regulations can discourage school participation (limiting the options available to families), they do not rise anywhere near the top of the factors parents value when choosing a school.

Parents are much more interested in those intangibles that standardized tests cannot capture, but that are more important to the long-term flourishing of their children, such as religious and values-based instruction. And for good reason: As Jay Greene has identified, we do not regularly see a relationship between changing test scores and later life outcomes.

Indeed, what parents are looking for is something apart from what their child’s traditional district school offered. To condition private school participation in a school choice program on adherence to the public school formula—as the Louisiana Scholarship Program does—renders school choice less meaningful by reducing the number of substantially different options available to families.

Policymakers should avoid being like the proverbial drunk looking for his lost keys under the lamppost because “that’s where the light is.” Standardized tests shine a light on an important aspect of school performance, but sometimes the keys are not under the light.