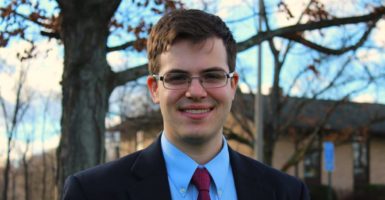 Tommy Valentine still lives at home, hasn’t graduated from college yet, and barely looks old enough to buy a beer. But the baby-faced 22-year-old with thick glasses will help plot the course of the Republican Party—and perhaps the direction of national politics.

Valentine isn’t just one of Virginia’s 49 delegates to the Republican National Convention. The young delegate also sits on the influential platform committee.

Along with 2,471 other delegates, he heads to Cleveland, Ohio, Monday to pregame the Republican Party’s 2016 presidential nomination. There, as one of 112 delegates elected to the platform committee, he will help draft what essentially is the party’s official vision statement.

His single focus, Valentine told The Daily Signal, is to “strengthen our party platform and oppose attempts by liberals to water down and weaken it.”

For Valentine, that means keeping the Republican platform pro-marriage and pro-life.

Before the convention convenes July 18, the platform committee—made up of one man and one woman from all 50 states, five territories, and the District of Columbia—will set out the party’s official position on everything from national security to social issues.

Every four years the committee undergoes this exercise, reevaluating old policy planks to hammer together a comprehensive, new platform. Then, a majority of delegates—at least 1,237—must approve the policy document in a floor vote.

But some conservatives fear that Donald Trump’s positions on issues could complicate an already arduous task.

“We have a presumptive nominee in Trump, who we honestly don’t know where he stands on many of the platform issues,” Valentine said. “It doesn’t seem like he’s given much thought to the abortion issue.”

On the campaign trail, Trump strayed from traditional Republican orthodoxies on issues ranging from the minimum wage to free trade agreements and from gender identity to abortion.

In April, Trump said the party position on abortion, which asserts “that the unborn child has a fundamental individual right to life,” should be amended. During a town-hall event televised on NBC, the candidate said he wanted to include exceptions for rape, incest, and the life of the mother.

But Trump aides have telegraphed that the New York businessman does not intend to pick policy fights at the convention. After a June meeting with conservative groups, senior aide Ed Brookover told The Washington Times that Trump “is committed to a conservative platform.”

Valentine says he will remain on the lookout for any last-minute moves to soften the party’s position on social issues such as life and marriage.

For a game plan, the young delegate points to conservatives’ defeat of an effort by Bob Dole’s presidential campaign to insert a “declaration of tolerance” into the GOP position on abortion. That was in 1996, when Valentine was 2 years old.

It’s remarkable that someone as young as Valentine could even hope to influence the party platform, said Morton Blackwell, president of the Leadership Institute.

“It’s wonderful for young people to be delegates,” Blackwell told The Daily Signal. “Frankly, there’s something about their involvement in politics that pleases people; I mean, that’s the coming generation.”

Valentine’s post on the platform committee is indicative of the party’s evolution over the last half a century, Blackwell said.

Back in 1964, Blackwell recalled, he was the youngest delegate to the Republican convention in San Francisco.

“At that time,” he explained, “to be delegate you had to have gray hair or none.”

Just 24 at the time, Blackwell said he spent much of the convention waving signs and stuffing envelopes for nominee Barry Goldwater.

As one of the younger delegates to offer new blood and fresh perspectives to the Grand Old Party’s delegation, Valentine had to prove he was up to the task. And that meant skipping class at Franciscan University of Steubenville, in Ohio.

To win, Valentine became a commuting candidate. Last semester, he says, he almost spent more time making the five-hour drive back to Virginia’s 8th Congressional District than he did in the classroom.

Each weekend for months, the emerging politico knocked on doors, made phone calls, and eventually beat out 19 other candidates to punch his ticket for Cleveland.

Valentine bristles at the suggestion that his slot in the Virginia delegation amounts to an ageist gimmick. Instead, he says, Republicans must meet millennials halfway to attract a demographic that “grew up in a much different time than our parents and grandparents.”

Valentine argues that millennials make up “the most pro-life generation ever” and insists that, with time, conservatives can win the marriage debate as young people mature and make families.

“Rather than just running away from these issues,” Valentine said, “I think the Republican Party should embrace it and not back down from our principles.”

He won’t have much time to make his case, though. After his two weeks in Cleveland, Valentine will return to school to finish his senior year of college  before graduating into politics full time.

This report has been modified to correct the name of the college Tommy Valentine attends.