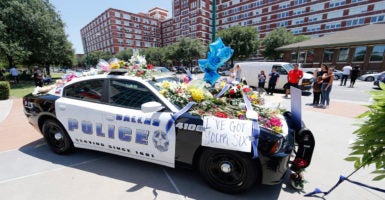 Flowers cover a Dallas Police Department cruiser after five officers were killed by a sniper during a protest. (Photo: Erick S. Lesser /EPA/Newscom)

The police department that became the victim of the deadliest attack on American law enforcement officers since 9/11 is known for its innovative, community-focused approach to the job of protecting the public, and enforcing the law.

The killing Thursday night of five police officers in Dallas, and the police shootings in Louisiana and Minnesota earlier this week, has renewed focus on the tensions between law enforcement and the communities they serve.

While the events of the past week have marred the progress made by police departments nationwide with issues related to relationship-building, transparency about officer use of force incidents, and training in de-escalation techniques, law enforcement experts say it would be wrong to withdraw from those efforts after tragedy strikes.

“I would say that being a nice person, being a nice police department, and a community engagement-focused police department is no guarantee against the possibility that a crazed lunatic will take advantage of a known large-scale event and take out a larger number of cops,” Jim Bueermann, president of the Police Foundation in Washington, D.C., said.

“I would caution people in connecting those dots between community policing and this man’s actions. His actions are the manifestation of evil and have nothing to do with the good work the people of the Dallas Police Department are engaged in,” Bueermann told The Daily Signal in an interview.

According to news reports, a man identified as Micah Johnson, 25, shot and killed five police officers, and injured seven others, in downtown Dallas on Thursday night.

Johnson, a military veteran who is black, said his goal was to kill white police officers. He was killed by police.

The officers who were shot were working patrols at a peaceful protest against the fatal shootings by police officers of black men earlier this week in Minnesota and Louisiana.

Both of those prior shootings were captured on video and broadcast on social media, prompting protests across the U.S.

The issue of police violence has roiled the nation since the fatal officer shooting two years ago of a black teenager in Ferguson, Mo., and led to a movement for law enforcement to adopt reforms to foster relationships with their communities.

The Dallas Police Department is known to be at the forefront of those efforts.

Mayor Mike Rawlings told reporters on Friday morning that Dallas this year has the fewest police officer-related shootings of “any large city in America.”

Dallas Police Chief David Brown has credited a focus on de-escalation and community policing for leading to a drop in excessive force complaints against officers.

Officers who work for Brown have to participate in deadly force training every two months. Last year, meanwhile, officers were issued body cameras to record interactions with civilians.

In a move to be transparent, the Dallas Police Department publishes on its website the number of officer-involved shooting incidents every year since 2003. The department also identifies the locations of such incidents, the outcome, and the names of the officers.

At the same time as these reforms, according to The Washington Post, crime in Dallas has also fallen, with murders in the city hitting a 50-year low in 2014.

Many of the reforms implemented in Dallas were embraced by a White House task force created by President Barack Obama two years ago that convened police officers, community leaders, and activists to identify best practices for law enforcement.

Ron Hosko, a former assistant director of the FBI who has been critical of Obama’s handling of police-involved shootings, says Dallas and other reform-minded departments should double down on those efforts in the face of adversity.

“Once they get past the pain of losing brothers, friends, colleagues, and partners, the department itself has to realize that this was a one-off event that doesn’t tend to happen around our country,” Hosko told The Daily Signal. “I think they will look at it rationally and realize they have been making steps in the right direction. It’s not the time to say we need to hunker down and be more offensive than defensive, and increase the risk to every one of these officers.”

“All of the indicators are good,” Hosko added. “It will be important for them to just keep a steady course.”

Hosko said that a department that communicates with citizens, and has their trust, can better work together to combat bad actors from carrying out violence.

“The best way to prevent these incidents is through community engagement and partners, with people in the crowd saying this guy on the fringe is on the edge and losing his mind, and get someone to pick up his phone and say something,” Hosko said. “You do that by building relationships.”

Ronal Serpas, who was superintendent of the New Orleans Police Department from 2010 to 2014, says that even though the ties between community and police didn’t stop the Dallas killer, it would be unfair to connect the city’s policies to what happened.

“The information we have is that the sniper specifically said he had a hatred of white police officers and his efforts to kill those people is based on his individual hatred,” said Serpas, who is now a professor at Loyola University New Orleans and the co-chair of the national group Law Enforcement Leaders to Reduce Crime and Incarceration.

“That’s a bit different than the community and police department working together, solving crimes together, working through strategies on quality of life issues, and then having someone from that community do this,” Serpas told The Daily Signal. “This incident does not necessarily represent anything other than what it is.”

Still, Serpas and the other law enforcement experts acknowledge that it will be difficult for officers to carry on with their duty during demonstrations that will inevitably happen in the future.

Bueermann suggests Dallas’ officers submit to what they know best.

“Chief Brown is a very smart police leader, and I’m sure when the moment is right he will deliver a message to his officers of the reality that the overwhelming number of people they interact with in Dallas support them and won’t do them harm,” Bueermann said. “There may be tension there, but even in that tension, you will find people desirous of good, respectful police and an appreciation for the good work good cops are doing to keeps those communities safe.”