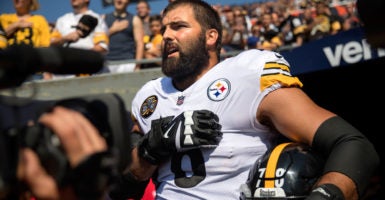 While Alejandro Villanueva’s team remained in the stadium tunnel, he alone came out to stand for the national anthem. (Photo: Erin Hooley/TNS/Newscom)

Only one member of the NFL’s Pittsburgh Steelers stood for the national anthem Sunday afternoon after President Donald Trump said that those players who don’t respect the flag should be fired.

That player was Alejandro Villanueva, an offensive tackle for the Steelers and a veteran who served three tours of duty in Afghanistan. The Army Ranger and captain, now a member of the Army National Guard, is a recipient of the Bronze Star.

Trump let it be known on Twitter on Saturday that he thinks players in the NFL who don’t stand for the national anthem should lose their jobs. Many players and teams protested by kneeling, and a few teams—one of them being the Steelers—refused to come out onto the field for the anthem.

If a player wants the privilege of making millions of dollars in the NFL, or other leagues, he or she should not be allowed to disrespect ….

… our Great American Flag (or Country) and should stand for the National Anthem. If not, YOU’RE FIRED. Find something else to do!

While Villanueva’s team remained in the stadium tunnel, he alone came out to stand for the national anthem before the Steelers’ 23-17 loss to the Bears in Chicago. Fox News reported that, in a postgame press conference, Villanueva drew criticism from Steelers head coach Mike Tomlin.

“Like I said, I was looking for 100 percent participation. We were going to be respectful of our football team,” Tomlin said.

“I stand for our flag and anthem, and I kneel for our fallen,” said Keith Harman, commander in chief of the VFW. “That’s what patriots do. We rally around the flag of our country, not use it and our Constitution as both shield and sword.”

Villanueva commented on the tactic of kneeling when then-San Francisco 49ers quarterback Colin Kaepernick started doing it in the 2016 preseason.

“I don’t know if the most effective way is to sit down during the national anthem with a country that’s providing you freedom, providing you $16 million a year … when there are black minorities that are dying in Iraq and Afghanistan for less than $20,000 a year,” Villanueva said in an ESPN interview.

However, in a Monday press conference, Villanueva said, “I threw my teammates under the bus, unintentionally.”

“Every single time I see that picture of me standing by myself I feel embarrassed,” he added, according to CBS’ Pittsburgh affiliate station, referring to how he was the only Steeler out of the tunnel during the anthem.

Villanueva was born into a Hispanic military family at a naval base in Meridian, Mississippi, and played rugby while growing up in Spain, according to Go Army Sports.

Fans didn’t take NFL players’ kneeling lightly Sunday as many in the stands booed those who did. This led to Trump’s returning to Twitter on Monday to praise the fans who booed.

Many people booed the players who kneeled yesterday (which was a small percentage of total). These are fans who demand respect for our Flag!

The issue of kneeling has nothing to do with race. It is about respect for our Country, Flag and National Anthem. NFL must respect this!