These Californians Are Threatening to Secede After Trump’s Victory 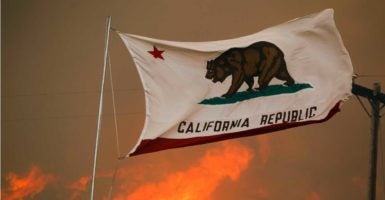 On Wednesday, #Calexit and #Califrexit began trending on Twitter. The hashtags have been used to discuss California’s potential secession from the United States following Donald Trump’s victory in the presidential election.

The California-themed hashtags are a reference to Brexit, the British public’s recent decision to leave the European Union.

Though Donald Trump was within half a percentage point of Hillary Clinton in the national popular vote, he was decidedly routed in California, winning just 33.3 percent of the vote to Clinton’s 61.5 percent.

At least one pro-independence group, Yes California, has made the case that California would be better off as a stand-alone country. The group calls for a referendum on California independence, to be held in the spring of 2019.

On its website, the group also says that “the United States of America represents so many things that conflict with Californian values” and that their movement is about “California taking its place in the world, standing as an equal among nations.”

California sends two senators and 53 representatives to Congress, and is the most populous state in the union.

Here is a roundup of some of the #Calexit and #Califrexit tweets:

I am proud to be a Californian.
I am terrified to be an American. You've shown your true colors. #Clinton2016 #CalifrEXIT

California's economy alone is the 6th largest in the WORLD. We would succeed as an independent nation. Just throwing that out. #CalifrEXIT

I think it's time California secede from the US. This isn't my country anymore #secedefromunion #californian #CalifrEXIT #NotMyPresident

I can't believe I am saying this, but a Trump presidency leaves us no choice. The west coast is better off seceding. #Calexit

California needs to break from this country. #CALEXIT

California should secede. We are the richest state in the U.S. Therefore it is strong enough to be its own country.#Calexit