How Congress Is Looking to Fix Immigration Enforcement Problem 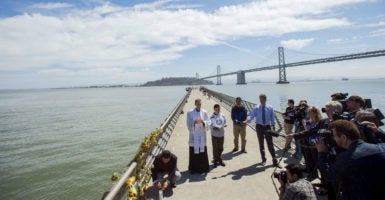 Father Cameron Faller leads a prayer vigil for shooting victim Kathryn Steinle in San Francisco on July 6, 2015. Steinle was fatally shot as she walked with her father along the pier on July 1, 2015. (Photo: Noah Berger/Reuters/Newscom)

The United States Senate is scheduled to hold a procedural vote on Wednesday on two bills related to immigration enforcement. The sanctuary cities and “Kate’s Law” bills were combined last year, but failed to overcome the 60-vote threshold needed to proceed to the bill.

The two bills were separated this time around because of concerns that some have about a mandatory minimum sentences provision of Kate’s Law.

The sanctuary cities bill, officially titled Senate Bill 3100 (the Stop Dangerous Sanctuary Cities Act), allows state and local law enforcement to cooperate with federal immigration and law enforcement officials with regard to actions taken to comply with an immigration detainer.

It shields the state, political subdivision, officer, or agent of such states from any legal liability if their actions were taken in compliance with the immigration detainer.

As a result of this and another decision, some have suggested that states and local officials may be subject to liability for complying with immigration detainers.

As we have detailed before, sanctuary cities generally prevent local law enforcement authorities from cooperating with federal immigration officers. It allows those localities to protect illegal aliens from deportation.

The Center for Immigration Studies estimates that there are approximately 340 sanctuary cities in the United States as of 2015. A map to those cities is linked here.

Kate Steinle was the 32-year-old women who, while walking with her father on a pier in San Francisco, was shot and killed by an illegal alien who had been deported five times and had seven felony convictions. The city of San Francisco, a notorious and blatant sanctuary city, let the killer free from a detainer just days before he murdered Steinle.

Her case has become the poster case against sanctuary cities, as we have written here, here, and here.

Kate’s Law would establish mandatory minimum sentences for illegal aliens who had been previously removed from the United States and then re-caught inside the United States. The bill, which is modest in its scope, would increase the punishment from its current penalty of imprisonment of not more than two years to imprisonment not less than five years and not more than six.

These modest increases in sentences for recidivist criminal aliens makes sense given the scope of the problem.

Whether either of these laws get past the 60-vote threshold is anyone’s guess.