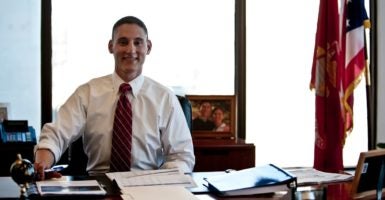 Ohio State Treasurer Josh Mandel and his team are showing that it doesn’t take long, or cost a lot, to give people easy access to how government is spending their tax dollars. (Photo: Abigail S. Fisher/Columbus Dispatch/MCT)

Let’s take a look at a good thing happening in the great state of Ohio, shall we? The state treasurer’s office is leading the way in transparency by taking Ohio’s checkbook online, giving citizens an easy way to track spending at all levels of government within the state, and helping Ohio earn the No. 1 ranking in government transparency in the U.S.

State Treasurer Josh Mandel and his team are showing that it doesn’t take long, or cost a lot, to give people easy access to how government is spending their tax dollars, and more easily hold elected officials accountable.

Here’s how it works.

Any government entity within Ohio—both state and local—that spends tax dollars is eligible to set up its own, unique checkbook site free of charge.

The checkbook tracks, categorizes, and itemizes budgets and expenses in an easy to read, digestible format. In its “Google-style” search that displays interactive charts and graphs, a user can search all expenses—including salaries, travel expenses, events, etc.—tracking monthly if their government is sticking to its budget.

For example, say you wanted to see how much the Ohio Commerce Department has budgeted and is spending on travel expenses around the state. Within a matter of seconds, you can see an entire picture of how much was budgeted, how much has been spent, and see specific expenses—right down to a working lunch at Chick-fil-A in Perrysburg, Ohio.

Even for a single state, there’s a lot to account for. Since the checkbook’s launch in December 2014, the treasurer’s office claims it has logged nearly $530 billion in spending, including 146 million individual transactions from entities all over the state.

Because of Ohio’s efforts, several states including Indiana, Arizona, and Kentucky have all inquired about setting up their own version of the Ohio checkbook, showing that government is becoming more aware of the people’s distrust, and is willing to invest in transparency in order to gain trust back.

A recent poll shows that just 1 in 5 people (19 percent) trust the government. Are you surprised?

Take a look at the recent federal omnibus budget passed late last year, a couple thousand pages, and over $1 trillion in spending.

Most Americans will never see a single expense from that massive amount of money, most give up as soon as they log on to the U.S. Treasury website. In fact, tracking government spending often requires teams of people at think tanks to comb through and analyze. It shouldn’t be this way, and because Ohio is leading the way, it doesn’t have to anymore.

In President Barack Obama’s first inauguration address to the nation in 2009, he laid out his vision for a more accountable government, saying:

Those of us who manage the public’s dollars will be held to account, to spend wisely, reform bad habits, and do our business in the light of day, because only then can we restore the vital trust between a people and their government.

While the president has done very little to live up to the lofty goal he set for himself almost eight years ago, he should look to Ohio, where real change is happening. Now that’s a check you can take to the bank.