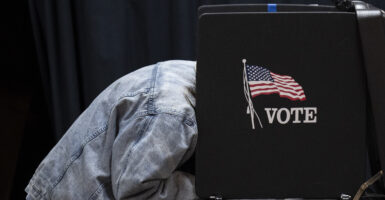 It was one of many ballot initiatives dealing with election integrity in this year’s elections. The Columbus Dispatch reported that Issue 2 had passed with 77.1% support from Ohioans with more than 92% of the vote counted.

The amendment requires that “only a citizen of the United States, who is at least 18 years of age and who has been a legal resident and registered voter for at least 30 days, can vote at any state or local election held in this state.”

The amendment also prohibits local governments from allowing people to vote in local elections if they are not eligible to vote in state elections.

That became an issue after Yellow Springs, a small town in western Ohio, voted to allow noncitizens to vote for elected officials in 2019.

“It’s a bad idea to callously give away the right to vote to people that haven’t earned it,” said Ohio Secretary of State Frank LaRose, a Republican, who was a leading proponent of the ban. “I think that citizenship has value, citizenship has status. So many of our ancestors worked so hard to earn that citizenship.”