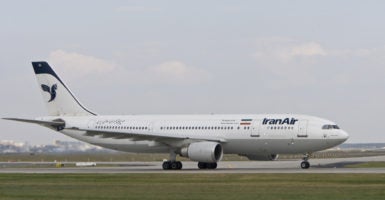 Rep. Peter Roskam, R-Ill., and other Republican lawmakers are working to ensure that taxpayers aren’t on the hook for financing that could end up benefiting Iran and its state-owned entities.

The Export-Import Bank, or Ex-Im, provides taxpayer-backed loans and loan guarantees to foreign countries and companies for the purchase of U.S. exports.

The bank’s charter prohibits the 82-year-old agency from extending taxpayer-backed financing to Iran. However, Roskam and his fellow Republican lawmakers warned that a loophole could allow Tehran to purchase U.S. products or services from third-party intermediaries that receive financing from Ex-Im.

The new bill would close that third-party loophole.

“In its [nuclear] deal with Iran, the Obama administration has dramatically increased the risk of death and destruction by the world’s foremost state sponsor of terrorism,” Katz, who has done extensive research on Ex-Im, said. “Lawmakers must ensure that the Export-Import Bank doesn’t help Boeing and other U.S. companies become tools of Tehran.”

“Lawmakers must ensure that the Export-Import Bank doesn’t help Boeing and other U.S. companies become tools of Tehran.” @Dianeskatz

The Obama administration’s historic nuclear deal—designed to ensure Iran doesn’t obtain a nuclear weapon in the near future—opened the door for U.S. corporations to do business with the hard-line Islamic regime, since the pact lifted sanctions on the country.

Iranian officials indicated in August their intent to purchase commercial aircraft from Boeing Co., which lobbied last year for both Ex-Im’s reauthorization and approval of the Iran nuclear deal.

The aerospace giant, Ex-Im’s biggest beneficiary, confirmed last week it agreed to a deal with Iran Air to sell the state-owned airline $25 billion worth of airplanes.

The Obama administration imposed sanctions on Iran Air five years ago after the airline used passenger and cargo planes to fly rockets and missiles disguised as medicine or spare parts to Syria and other nations.

Those sanctions were dropped as part of the White House’s multinational deal with Iran, and Boeing’s agreement with Iran Air is the first of its kind since the Islamic Revolution in 1979.

Earlier this month, Roskam and Rep. Jeb Hensarling, R-Texas, sent Boeing a letter raising concerns about its potential sale of commercial jets to Iran and questioning whether the corporation would attempt to involve Ex-Im and its taxpayer-backed loans.

In an interview with The Daily Signal last week, Roskam said Boeing was “parsing its language” in its response to the two lawmakers.

The aircraft manufacturer plans to sell roughly 80 commercial airliners to Iran Air and secure the sale of another 29 to a third party, which would lease the aircraft to Tehran.

Boeing didn’t detail whether it would seek Ex-Im financing to fund the sale of the jets to the third party. However, the bank cannot currently approve transactions of more than $10 million because of vacant seats on its five-member board of directors.

With the board lacking a quorum of three members, all Ex-Im transactions topping $10 million have been stalled.

Rep. Ed Royce, R-Calif., chairman of the House Foreign Affairs Committee, attempted in November to bar Ex-Im financing for governments classified as state sponsors of terrorism by the State Department. Three countries were on the list at that time: Syria, Sudan, and Iran.

The House rejected that legislation after opponents argued existing law prohibited Ex-Im from providing financing to state sponsors of terrorism.