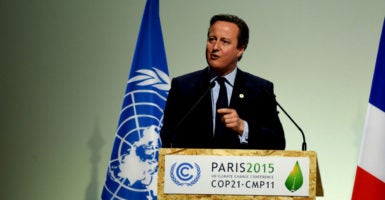 The fate of the European Union’s global warming commitments negotiated as part of the Paris Protocol may be in jeopardy as result of Brexit. The U.S. on the other hand, should take a page out of the U.K.’s playbook and not only withdraw from the Paris agreement, but also withdraw participation from the United Nations Framework Convention on Climate Change altogether.

Last December, leaders from around the world convened at the 2015 U.N. Climate Change Conference in Paris. The agreement reached at the end of the Paris conference set a target of achieving a 2 degree Celsius warming threshold with intentions to limit warming to 1.5 degrees Celsius.

To achieve that goal, countries made individual commitments to reduce carbon dioxide and other greenhouse gas emissions, largely centered on shifting away from affordable natural resources such as coal, oil, and natural gas, and toward more expensive, intermittent, subsidy-dependent renewables.

Known as Intended Nationally Determined Contributions, the Obama administration pledged to cut U.S. greenhouse gas emissions by 26 percent to 28 percent below 2005 levels by the year 2025.

The EU, on the other hand, submitted Intended Nationally Determined Contributions on behalf of its member countries, pledging to reduce greenhouse gas emissions 40 percent below 1990 levels by 2030.

How the U.K.’s exit affects the EU’s commitment remains to be seen. As Bloomberg BNA reports:

Without the U.K. included, the 40-percent, EU-wide reduction target will be more difficult, since the U.K. was expected to have a more ambitious internal target, with the Committee on Climate Change, an autonomous U.K. government advisory body, recommending a 57-percent domestic reduction in emissions compared to 1990 levels by 2030.

Because carbon dioxide emitting energy sources provide more than 80 percent of the entire world’s energy consumption, decarbonizing the energy economy will drive up energy costs, costs which must be absorbed or passed on. Costs that hit families and businesses over and over again.

The U.N.’s global warming agreement is a costly, non-solution to a likely non-problem.

The head of the United Nations Framework Convention on Climate Change, Christiana Figueres, said the EU’s commitment may need a “recalibration.” That could either mean the remaining member countries of the EU need to make greater economic sacrifices or the EU lightens its commitment pledge to reflect the U.K. leaving. Nothing precludes the U.K. from working with the EU to meet that target as several non-EU members such as Norway committed to do so.

Alternatively, the U.K. could abandon its greenhouse gas emission commitments that will deny its citizens access to affordable, dependable energy sources. Bloomberg BNA also makes note that “Surveys showed those in the U.K. who voted to leave the EU were about twice as likely to be skeptical about the science behind climate change, and many ‘Brexit’ leaders were similarly skeptical of either climate science or international treaties.”

Other countries could become similarly skeptical of paying higher energy prices for very little, if any, climate benefit in return.

No matter what ultimately occurs, the climate returns will be the same.  And that is virtually nonexistent. The entire industrialized world could shut down all economic activity for good and it wouldn’t make a lick of difference. Even if the developed nations cut their emissions by 100 percent, it would avert warming by only 0.278 degrees Celsius by the year 2100. Both developed and developing countries should rightly be wary of de-development policies that obstruct economic growth and deprive people a better standard of living.

Participation has wasted more than $10 billion of taxpayer money, providing large wealth transfers from developed countries to developing ones—wealth transfers that do little, if anything, to promote economic growth and combat global warming. In fact, government to government transfers have done more to line the pockets of cronies and establish dependence on governments and international bodies than to increase prosperity and improve the environment.

The United Nations Framework Convention on Climate Change is a failure and it’s long past time that the U.S. withdraws.