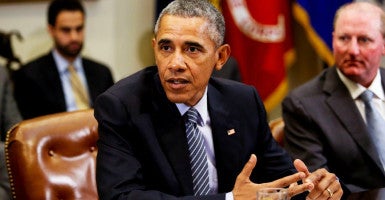 Delegates from around the world will meet in Paris in December to negotiate an international climate treaty with the goal of reducing carbon dioxide and other greenhouse gas emissions.

Some countries will push a “green” agenda to increase use of energy resources such as wind and solar, and decrease the use of more affordable, reliable, and efficient energy from coal, oil, and natural gas.

But there’s another clear agenda for most of the developing countries attending the Paris Protocol. And it involves a different kind of green.

Climate negotiations leading up to the Paris conference called for a Green Climate Fund that would collect $100 billion per year by 2020. The goal of this fund: to subsidize green energy and pay for other climate adaptation and mitigation programs in poorer nations—and to get buy-in (literally) from those poorer nations for the final Paris agreement.

Wind and solar aren’t free, and developing nations have argued that they shouldn’t have to forgo economic growth simply because developed nations have dramatically increased their standards of living on economies fueled by coal, oil, and gas.

Any such climate fund would amount to a massive wealth transfer. So far, only $10 billion of the sought after $100 billion has been pledged by 37 countries, with the U.S. being the biggest donor.

In the end, it may amount to nothing more than a giant Ponzi scheme. The money may not even fund the politically preferred energy sources demanded by proponents of a climate fund.

For example, Japan offered $1.5 billion to the Green Climate Fund that includes loans by the Japanese government for Japanese companies to build coal power plants in southeast Asia.

China announced its own version of financing with the South-South Cooperation Fund.

But say developed countries such as the U.S. fork over the $100 billion a year. Will it even help developing nations?

Famed economist Adam Smith wrote his magnum opus, “The Wealth of Nations,” on the importance of a free society, open exchange, and free markets.

In it, Smith famously wrote:

It is not from the benevolence of the butcher, the brewer, or the baker that we expect our dinner, but from their regard to their own self-interest. … A nation is not made wealthy by the childish accumulation of shiny metals, but it enriched by the economic prosperity of its people.

Charity can be doled out by the ladle only so long as the pot isn’t empty.

Free enterprise, rule of law, and private property are the key ingredients for prosperity. These are the principles that actually will help people in developing countries prepare for and cope with a changing climate and natural disasters, whether or not they are caused by man-made greenhouse gas emissions.

But these principles are significantly lacking in many undeveloped countries.

A stark difference exists between the preparedness of people for natural disasters in countries that are economically free and those controlled by despotic regimes.

This was plainly evident in 2010, when a 7.0-magnitude earthquake struck America’s southerly neighbor Haiti, flattening cities, killing hundreds of thousands, and displacing and injuring millions. A 6.9-magnitude earthquake near San Francisco in 1989, by contrast, killed 60 and did much less damage.

Poverty Should Be the Concern

Addressing poverty, then, is the real challenge at hand, not climate change. Speaking at a preliminary climate meeting, the environmental minister of India, Prakash Javadekar, said: “Unless we tackle poverty, unless we eradicate poverty, we cannot really address the climate change.”

Affordable, reliable, and widely available energy is essential to addressing poverty and unlocking opportunity and prosperity. Energy heats homes and meals, runs schools and hospitals, and creates products and opportunities that help lift people out of poverty.

It is no surprise that some Indians have spurned efforts by Greenpeace to bring expensive, intermittent solar energy to areas of India that have had next to no electricity. Some reportedly responded: “We want real electricity, not fake electricity!”

Yet the Obama administration already has pledged billions of dollars to developing nations to “combat” climate change. The administration has pushed for building more expensive and intermittent renewable energy sources when more than a billion people live without any reliable electricity.

A better name for the Paris Protocol, then, would be Transfer of the Wealth of Nations.

Not only do large wealth transfers waste a lot of other people’s money, but more importantly, they ignore the underlying problems that trap countries in low levels of growth and depressing standards of living. True reform would shift power and responsibility away from the government and to the people.

In the meantime, Congress is the gatekeeper of the budget. Lawmakers should make it clear to the Obama administration and anyone seeking climate funds that no U.S. taxpayer dollars will be available.

More wealth transfers would serve only to create another barrier to more prudent strategies to increase prosperity and protect the world’s poorest citizens from climate change and extreme weather events.