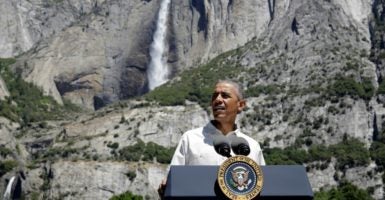 Visitors to national parks are free to use whichever public restroom they believe matches their gender identity, the Department of Interior says.

“As it relates to recently passed state laws relating to the transgender community, visitors to public lands and water sites are welcome to use restrooms that best align with their gender identity,” an Interior Department spokesperson told The Daily Signal in an email.

But a national policy expert says visitors to national parks should be concerned that others can enter the restroom of their choice regardless of their biological sex.

“It is troubling because national parks have traditionally been family-friendly destinations,” said Peter Sprigg, senior fellow for policy studies at the Washington-based Family Research Council, which advocates conservative social values. “Now women and girls will have to worry about sharing a restroom with biological males.”

Public restrooms have become a national political issue in recent months after President Barack Obama’s administration took legal action against North Carolina for a state law that requires people to use public restrooms that correspond with their biological gender.

Then, the administration threatened to withhold federal money from schools if students were not allowed to use the restroom they thought matched their gender identity.

No matter which state a national park is in, federal law and regulations govern activity there.

The Interior Department is charged with stewarding the nation’s public lands, waters, parks, and wildlife. The government maintains 58 national parks across the United States, visited by 307.2 million people in 2015.

In an email responding to The Daily Signal’s question about transgender bathroom policy, the department spokesperson also said:

We welcome all visitors regardless of their race, sex, religion, national origin, sexual orientation, or gender identity to visit public lands and waters in their back yard and beyond. … We remain committed to appropriately representing our nation’s diversity on our public lands, and continue to work alongside local communities and leaders to find meaningful ways to preserve and tell the stories that reflect the narrative of all Americans.

“People have always been able to choose the public restroom within the national park system that aligns with their gender identity,” Barnum told The Daily Signal in an email. “The National Park Service has never had a rule that determined nor designated what restroom someone should use according to their gender identity.”

Another department spokesperson also said restroom use by gender identity is not a new policy for national parks, but a continuation of existing nondiscrimination policy.

The Daily Signal sought comment from other federal agencies to determine whether a uniform bathroom policy exists for all federal buildings and federally maintained public restrooms, and whether the administration would hold these federal buildings to the same standard it applies to local schools.

“This is another illustration of how extreme the Obama administration is in pushing this radical agenda in the last few months in office,” he told The Daily Signal in a phone interview.

In the North Carolina case and its transgender policy mandate for schools, Sprigg noted, the administration relied on provisions of U.S. law known as Title VII and Title IX.

The administration counts gender identity under sexual discrimination, reasoning that many scholars and lawyers reject.

“I’m not sure how either apply to national parks,” Sprigg said. “It would be tragic if we have a sexual assault in a national park public restroom before the administration takes this seriously.”

On Friday, Obama declared federal land at Christopher Park, across the street from where the Stonewall Inn riot in New York took place in 1969, as the Stonewall National Monument in honor of an event that sparked the gay rights movement. Obama said in part, referring to lesbian, gay, bisexual, and transgender Americans:

The Stonewall uprising is considered by many to be the catalyst that launched the modern LGBT civil rights movement. From this place and time, building on the work of many before, the nation started the march—not yet finished—toward securing equality and respect for LGBT people.

National Parks Service staff hanging the temp. banner on the first LGBT National Monument I the US! #Pride pic.twitter.com/uli2Bhvms4