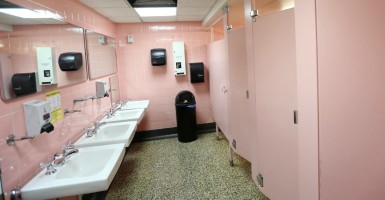 The largest conservative congressional caucus is calling into question the legality of President Barack Obama’s transgender bathroom directive for schools.

Chairman Bill Flores, R-Texas, is encouraging Republican Study Committee members to sign on to a letter, pushing the Departments of Education and Justice to detail how, and on what authority, they plan to enforce the new guidelines.

>>> Read the full letter obtained by The Daily Signal here

“Americans are incensed by President Obama’s blatant executive overreach,” Flores said, citing the IRS controversy, Obamacare, and the Iranian nuclear agreement. “Now they are threatening school funding over an issue that should rightfully be left to the states. Their actions are politically motivated and Congress has every responsibility to challenge them.”

The effort is led by Rep. Mark Walker, R-N.C., who authored the letter.

In the letter, which is addressed to Attorney General Loretta Lynch and Education Secretary John King, lawmakers ask them to “explain why schools must disregard the privacy, ‘discomfort,’ and emotional strain imposed on other students during use of bathroom, showering, and changing facilities and overnight accommodations as these schools comply with this guidance.”

By Wednesday night, the letter, which will be sent Thursday, had attracted 73 signatures from GOP lawmakers. To date, it represents the most significant development from a Republican Congress that’s been reluctant to challenge Obama on the issue.

Walker told The Daily Signal that the RSC inquiry is designed to begin returning discretion over the issue to the municipal and state level.

Under the current guidelines, Walker described a situation where individual students, not parents and teachers, dictate rules “from one week to the next.”

“If a 17 year-old young man wants to go shower with the girls on the soccer team,” Walker said then under the new guidelines, “he’s allowed to do that because of his will or his gender fluidity for the week [he] can tell the teacher ‘this [is] what I’m feeling, this is where I’m at’ and she has no recourse to step in.”

How Will the Guidelines Be Enforced?

The Obama directive has been widely interpreted as suggesting schools must comply with the bathroom proposal or potentially lose federal funding.

The letter asks the administration to detail what actions the departments would take against “a teacher, school administrator, educator, school contractor, or person volunteering at a school who does not comply with this guidance.”

What Legal Authority Does the Administration Have to Change Rules?

While the bathroom directive caught Republicans off guard, The New York Times reports that the Obama administration had been working on the new guidelines for months.

Walker argues that any change to Title IX requires an act of Congress. “The whole starting place, the foundation of this [letter],” he told The Daily Signal, “is basically to remind [the Obama administration] that they don’t have the jurisdiction to begin this in the first place.”

The letter orders the departments to “delineate the statutory authority under which the ED and DOJ issued this guidance,” and to confirm whether or not they consider the directive as legally binding.

Will Conscience Rights Be Recognized and Accommodated?

The letter pushes the Obama administration to detail whether or not exceptions to the new rules will be afforded to individuals and school administrations.

“Detail whether the ED and DOJ will recognize or accommodate rights of conscience and privacy in an individual’s or institution’s non-compliance with this guidance,” the letter states.

The lawmakers asked the Education and Justice Departments to respond by May 23.