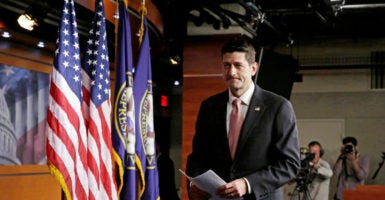 Congress needs to get that issue right if they want to maximize the plan’s effect on growth. (Photo: Uri Graipas /Reuters/Newscom)

House Republicans released a blueprint for tax reform on Friday.

If Congress follows the architecture the blueprint lays out, it will create a strongly pro-growth tax system that will create jobs, raise wages, and increase opportunity for American families at all income levels.

On the individual side, the blueprint calls for lower tax rates for all families and consolidates the current seven tax brackets to three. The brackets in the blueprint are 12 percent, 25 percent, and 33 percent. The blueprint does not specify what income levels they kick in at.

The standard deduction is substantially increased to $12,000 for single filers and $24,000 for families. This will greatly simplify filing for many taxpayers.

There are no personal exemptions, but the blueprint increases the Child Tax Credit to $1,500 per child. It also keeps the the Earned Income Tax Credit, educational credits, the exclusion for employer-provided health insurance, the mortgage interest deduction, and some form of allowance for charitable contributions. It eliminates most other deductions and credits.

By reducing the penalty on savings, the blueprint moves the tax code toward a tax on consumption as opposed to the current hybrid income-consumption model. This is important because the income tax taxes saving and investment multiple times, whereas a consumption tax only taxes them once. It keeps individual retirement accounts like 401(k)s and it lowers tax rates on capital gains and dividends from the current 23.8 percent rate to 16.5 percent. Interest income is taxed at 16.5 percent. It also repeals the estate tax, also known as the death tax, which is another tax on saving and investment.

These reforms will boost the economy because they will increase the incentives for families to work and save. Although it would be better to eliminate capital gains and dividends taxes altogether, the lower rates will reduce the double taxation of business investment and therefore be beneficial. The elimination of many credits, deductions, and exemptions will increase economic efficiency and also help economic growth.

The biggest growth effects of the blueprint will come from the reforms it proposes for businesses.

Pass-through businesses will no longer be taxed as part of the individual system. Instead, they will have their own system with a much lower rate, 25 percent, than the 43.4 percent rate they pay now.

The rate for c-corporations declines to 20 percent from 35 percent which, when added to the average rate the states add on, is the highest among developed nations.

The blueprint proposes a territorial system so U.S. businesses will no longer owe an extra layer of tax on income they earn in foreign countries. The current worldwide system, together with the high rate, is reducing investment in the U.S. and is a leading cause of the corporate inversions. Less investment is costing U.S. workers jobs and suppressing their wages.

Businesses would be allowed to expense, or immediately deduct, the full cost of capital such as machinery, equipment, plants, and other productive assets. Under current law, they sometimes have to wait as many as 39 years to deduct the cost of purchasing investment property under arcane depreciation rules. That raises the cost of capital and also reduces investment.

The blueprint moves the current system in the direction of a consumption tax. The blueprint also imposes a territorial tax structure where foreign sourced income is no longer taxable in the United States. This could exacerbate the issue where U.S. companies shift income abroad in order to escape taxation without strong base erosion and profit shifting policies.

In order to address this concern, the House Republican proposal includes a policy that would exclude U.S. exports from taxation, but would tax imports. Therefore, U.S. companies will not be able to avoid taxation from shifting taxation abroad. This is consistent with a redesigned tax system with a consumption base as it taxes goods where they are consumed and not where they are produced.

A lower rate, a territorial system, and expensing would be a boon to the economy because the outdated business tax system is the biggest drag in the tax code on the economy today. The business plan the blueprint lays out is similar to the one The Heritage Foundation proposed in 2015.

The blueprint is of course only the beginning of a tax reform plan. Many important details are yet to be determined. House Republicans anticipate the plan will be approximately revenue neutral although it will not be entirely clear that is the case until more details emerge. Tax revenues, however, are above historical norms so there is certainly room for a tax cut.

The fact that the House anticipates the final plan will be revenue neutral indicates there are other parts of the plan that will raise revenue and likely reduce growth. Revenue-raising policies that are not pro-growth need close examination because they could seriously hinder the ability of the plan to grow the economy if they are done incorrectly.

For instance, the blueprint makes a fundamental error in the way it taxes interest. The conventional wisdom on interest deductions is that they should be eliminated if businesses are granted expensing. Therefore, because the blueprint establishes expensing, it also largely abolishes the deductibility of interest expenses.

But those two policies are not two sides of the same coin. Allowing expensing and interest deductibility does not create a negative interest rate for debt financed capital if the tax is calculated correctly.

If interest income is taxable, then interest income should be deductible. Or interest income can be exempt and a deduction denied. Either scenario is neutral. The blueprint could raise substantial revenue by going with the latter method and not create a major distortion in the code, probably the same amount as the method it chose, which does create a distortion. Congress needs to get that issue right if it wants to maximize the plan’s effect on growth.

If Congress gets the details correct, the blueprint will prove to be the foundation of a tax plan that will strongly boost the size of the economy, increase real wages, and create millions of jobs.