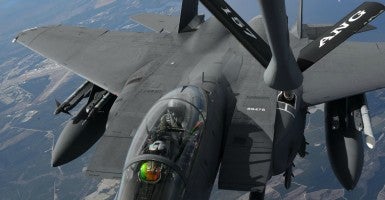 Brad Chojnacki is a member of the Young Leaders Program at The Heritage Foundation.

Thousands of American troops have been taking part in a large-scale military exercise on NATO’s front-line state of Poland, which borders Vladimir Putin’s Russia, its close ally Belarus, and war-torn Ukraine. The message is unmistakable—letting Moscow know that the U.S. and its allies take its treaty obligation to defend Eastern Europe seriously.

This drill began in 2006 as a lone Polish effort, and has grown to be one of the largest military exercises to occur in Poland in 25 years.

That is code for assuring America’s allies that the U.S. will defend them should the Russians decide to invade.

According to the U.S. Army, “This exercise further supports assurance and deterrence measures by demonstrating allied defense capabilities to deploy, mass and sustain combat power.”

That is code for assuring America’s allies that the U.S. will defend them should the Russians decide to invade.

The Russian annexation of Crimea and invasion of Ukraine has left many of the eastern NATO countries nervous and anxious for guarantees of NATO protection. History buttresses their anxiety.

Russia still views Eastern Europe as its backyard—as it did during imperial times. It is estimated that, at its height, it was expanding at the rate of almost 90 square miles a day. By 1896 Tsar Nicholas II was crowned as “[Emperor] of All the Russians, Czar of Moscow”, as well as ruler of Poland, Kiev, Lithuania, Finland, Estonia, Bulgaria, and many more.

To this day Russia does not view these as sovereign countries, but as former vestiges of Russian imperialism that belong under the influence of Moscow.

Many of these nations are members of NATO, now firmly part of the West. That is why these nations, now our treaty allies, fear the threat of invasion. Much of their history is blemished by Russian subjugation.

The Baltics (Latvia, Lithuania, and Estonia) are small, geographically isolated from the rest of NATO, and have a significant ethnic Russian minority population. They are also facing a nontraditional threat to their security—active measures, or what is now commonly called “hybrid warfare.”

Active measures are a type of information warfare. It combines disinformation, propaganda, and manipulation of public opinion in order to influence the actions of a foreign country or people. These were used extensively by the Soviets in an effort to create instability in areas of interest.

The Baltic countries find themselves fighting Russian active measures on multiple fronts: their language and politics are being subverted. Russian media outlets are buying more space in order to push out native speaking media with a pro-Russian message. In the Baltics there is no need to translate or tailor their propaganda because of the Russian speaking population. Because of this, ethnic Russians and other Russian speakers are motivated to force their countries closer to Moscow.

There is also corruption problem. According to the 2016 Index of Economic Freedom, Latvia scores a 55 in the category freedom from corruption. The world average is 42.6, and Latvia has shown increases in this measure since 2013. However, there is still an element of the Russian elite and professional criminals bringing money into Latvia. This brings in both unwanted attention and influence pulling Latvia ever closer to Moscow.  Lastly, there is the tangible threat of Russian hard power. The Russian military has been moving to assert power over the Baltic Sea and airspace over Estonia increasingly in the past few years.

Understanding this threat, is NATO prepared to defend its front-line Eastern allies?

Putin revived a Soviet-era strategy called “active measures,” or “hybrid warfare”, and has successfully integrated this strategy to fit his imperialist agenda. His implementation is leading to a slow, steady corrupting influence into the Baltics. With Ukraine and Crimea, it has gone further and outright violence ensued. An expansionist policy may be the norm for Putin, but NATO has an obligation to curb such appetites against its members.

That is why Anakonda 2016 matters. This exercise has already drawn criticism from the Russian government about escalating tensions between Moscow and NATO. Russian Foreign Minister Sergey Lavrov has called this exercise unjustified, as well as commenting that there is no Russian threat to any NATO member. But he did make sure to add that, “Russia’s sovereign right to ensure its security will come into force, [making use] of methods adequate to [respond to] today’s challenges.”

In light of this, it is important for our allies to feel that they are not being forgotten. The most important facet of NATO deterrence is the credible threat that aggression will be met with a resounding military response. Without showing our allies that they can believe in the U.S. commitment to their security, we might as well be paving the way for a Russian invasion.