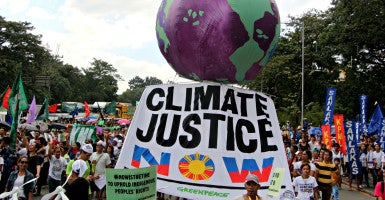 House Republicans seek details on links between activist state attorneys general and environmental groups such as Greenpeace, organizer of this demonstration in the Philippines on Nov. 28, 2015. (Photo: Gregorio B. Dantes Jr. / Pacific Press/Newscom)

House Republicans are pressing efforts to safeguard the First Amendment rights of scientific skeptics who dissent from what they consider the Obama administration’s alarmist position on climate change, according to letters to 17 state attorneys general.

The series of letters, sent Friday and signed by 17 of the 22 Republican members of the House Science, Space, and Technology Committee, renew an earlier request to the state attorneys general for information detailing their communications with environmental organizations.

They also ask for communications between employees for the state attorneys general and the Justice Department, the Environmental Protection Agency, or the White House.

“The committee intends to continue its vigorous oversight of the coordinated attempt to deprive companies, nonprofit organizations, and scientists of their First Amendment rights and ability to fund and conduct scientific research free from intimidation and threats of prosecution,” the letters say.

The top state law enforcement officials on the receiving end are given until the close of business June 24 to provide the House committee with “all documents and communications” between their offices and environmental activist groups pertaining to their potential prosecution of nonprofit groups, companies, and individual scientists for not toeing the official line on global warming.

“I’m glad to see this House committee trying to investigate what these state AGs are doing, which is an abuse of their legal authority and a direct assault on the First Amendment rights of those vigorously debating climate change,” Hans von Spakovsky, senior legal fellow at The Heritage Foundation, told The Daily Signal, adding:

The fact that these state AGs are targeting those who they believe have the wrong view on an unproven, scientific theory is shocking and the kind of behavior one would expect to see in Communist China or the old Soviet Union.

Members of the group of attorneys general, also dubbed the Green 20, have subpoenaed documents, communications, and research in an effort to acquire the work material of more than 100 academic institutions, nonprofit organizations, and individual scientists, the House committee notes. These organizations and individuals were targeted because they questioned the merits of Obama’s climate change agenda, the release explains.

The five Republicans who did not sign on are Barbara Comstock of Virginia, Jim Sensenbrenner of Wisconsin, Randy Hultgren of Illinois, Steve Knight of California, and Thomas Massie of Kentucky.

In May, Republican committee members sent letters to the 17 state attorneys general and several green activist groups, warning against efforts that could lead to the criminalization of scientific dissent.

Those letters said, in part:

The committee is concerned that these efforts to silence speech are based on political theater rather than legal or scientific arguments, and that they run counter to an attorney general’s duty to serve ‘as the guardian of the legal rights of citizens’ and to ‘assert, protect, and defend the rights of the people.’

The members of the science committee addressed a separate package of letters regarding “coordinated efforts to deprive scientists of First Amendment rights” to the Union of Concerned Scientists, the Climate Accountability Institute, the Climate Reality Project, Greenpeace, the Pawa Law Group, and the Rockefeller Brothers Fund, among others.

In the letters sent Friday, the GOP lawmakers say Congress in fact has broad authority to conduct such a review:

Congress’ oversight powers are derived from the Constitution and have been repeatedly affirmed by case law [and the requests are] valid and legally sustainable.

The letters reiterate last month’s demand for “all documents and communications between or among” employees of the offices for the state attorneys general and the environmental groups, which also include 350.org, the Global Warming Legal Action Project, and the Rockefeller Family Fund.

This report has been modified to correct the number of Republicans on the House committee who signed last week’s letters to state attorneys general, and to name the five who did not sign.