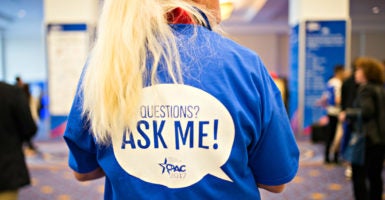 “If you ask a question innocently enough, the truth comes out," panel moderator John Fund says at CPAC, though he wasn't talking about this volunteer at the gathering. (Photo: Zach D Roberts/ZumaPress/Newscom)

For conservatives, the “lunacy,” “wrongness,” and “criminality” of climate change theories is the gift that keeps on giving, the executive editor of the London branch of Breitbart News Network said Thursday during a panel discussion at the Conservative Political Action Conference.

Delingpole identified these three strands as a sort of religious view that sees man “as a cancer and blight to the planet,” a “follow the money” component in which well-placed individuals “make money off scams” at public expense, and a political component that exists, he said, because “the left has always wanted to find scientific justification to tax and regulate us and control our lives.”

Joining Delingpole were Steve Milloy, a lawyer and author who founded the website JunkScience.com, and Tony Heller, who has written under the pseudonym Steven Goddard at the blog Real Science, which he founded. John Fund, a columnist for National Review, acted as moderator.

When he was on a panel at the Aspen Ideas Festival in 2008, Fund recalled, he noticed that activists there were substituting the words “climate change” for “global warming.”

He asked audience members to explain the change, and it turned out to be “a very uncomfortable question,” Fund said. “If you ask a question innocently enough, the truth comes out.”

Since the planet isn’t always warming, environmental activists found that they had more flexibility to advance their agenda under the more generic label of “climate change,” he said.

Looking to the future of energy policy, Thursday’s CPAC panelists said they found cause for encouragement with the Trump administration.

Milloy credited President Donald Trump for a professed willingness to “abolish the EPA” and for recognizing the Environmental Protection Agency has committed “regulatory overreach.” He said he anticipates the Trump administration will “turn loose the American energy industry.”

Environmental activists have made a concerted effort to circulate “fake climate news” in recent years, but the technique is not exactly new, Heller said.

The 1692 witch trials in Salem, Massachusetts, may have been brought on in part by a spell of cold weather, he suggested.

Citizens blamed alleged witches for lower-than-average temperatures, according to some news reports.

Panelists also discussed the “climategate scandal” involving emails leaked to the internet from the University of East Anglia in Great Britain in 2009. The emails showed that some university researchers appeared willing to manipulate scientific data to exaggerate global warming.

Such manipulation of scientific data is often at the root of “fake news,” panelists agreed.