Snapshots From a Trip to Russia to Talk ‘New Era’ Journalism 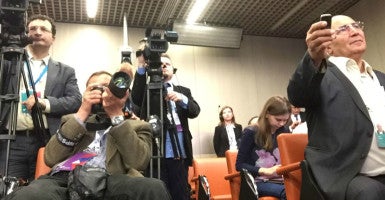 Cameramen are among those documenting the action at the "New Era of Journalism" conference convened in Moscow by Russia's state-run news organization. (Photo by Sharyl Attkisson/The Daily Signal)

I traveled halfway around the world earlier this month for a journalism conference in an unlikely place: Moscow.

It was an invitation-only event, attended by about 300 international journalists, focusing on censorship and what was termed to be a “farewell to mainstream” by Russia’s state-run Rossiya Segodnya (Russia Today) International Information Agency.

We debated dicey topics that largely have been off-limits in the dialogue here in the U.S. And I think that’s what was the most striking: Journalists from places like China, Syria, Lebanon, the U.K., South Africa, Russia, Japan, Sri Lanka, and India went to the former Soviet Union to speak openly about global trends toward censorship.

What did I learn?

It’s bad all over.

Increasingly organized and sophisticated efforts to shape the news narrative is a subject I addressed in my New York Times best-seller “Stonewalled,” and I’ll elaborate upon it in an upcoming book. But these important topics have been only whispered of and complained about off to the side at journalism conferences I’ve attended in the U.S.

In Moscow, they were front and center at the conference, called “New Era of Journalism: Farewell to Mainstream.” Journalists—left, right, center, and neutral—reported being marginalized and controversialized when they steer from the chosen narrative. They reported heavy doses of self-censorship among once-fearless news organizations.

A journalist from South Africa, Chris Borain, questioned one state-run news organization’s move to omit video of violent protests in that country.

While Borain said there are legitimate concerns that showing the demonstrations could beget more, the reporter viewed the effort to shield the public from this difficult reality as a slippery slope.

Ahmad Dawa, head of the Syrian Arab News Agency, described how the houses of reporters sometimes are hit by mortar shells in retaliation for their stories about Syria’s civil war. “It’s not easy performing as a journalist in China … but I think there are lots of brave, courageous journalists trying to push the envelope, trying to do a great job given that constraint,” she told me.

Neil Clark, a U.K.-based journalist, says he and his family have been the target of organized harassment campaigns because of his reporting. Clark contributes to a wide range of U.K. and international publications, and his blog was voted best U.K. blog in the 2007 Weblog Awards.

“The parameters of the things that we can sort of say and write are much narrower now than they used to be,” he said. “I call it the new McCarthyism … the targeting of any journalist who really puts their heads above the curb on certain issues.”

Clark said foreign policy is the No. 1 “no go” zone at the moment for reporters who don’t carry the government’s water. I’ve been smeared online, defamed … this is the Orwellian factor, that people [who] are doing this smearing, escaping it themselves, are the real extremists. You have personal stuff put out online, personal attacks, my wife has been attacked, it brings in the family. And this is a kind of bullying intimidation, and it’s all meant to silence a journalist and also push you out of the mainstream.

Another British writer, Rodney Atkinson, told me his criticism of the origins of the European Union and his reporting on Britain’s possible exit from the EU have made him a target, since he isn’t advancing the government’s narrative.

“Google is heavily integrated with Washington power, at a personal level and at a business level,” Assange told the reporters.

Foreign journalists sometimes debated and disagreed on what constitutes censorship, whether provocative examples of free expression should be allowed if they’re offensive, and who should decide whether expressions are harmful enough to justify forbidding them. “Journalists are the object of manipulation attempts by those who try to disseminate false information from business, state authorities, and public opinion,” Dmitry Kiselev, director general of the Rossiya Segodnya International Information Agency, said. Kiselev, whose name also appears as Kiselyov in the West, added:

Journalists are ostracized, criticized for their opinions, and placed on sanctions lists … banned from some countries for doing their jobs. We’re in a post-mainstream era. It’s new censorship.

Russia is criticized for its own heavy-handedness when it comes to the news.

Reporters Without Borders ranks Russia at 148 out of 180 countries on its “press freedom index” for what the group calls Russia’s “stifling atmosphere for independent reporters.”

Nonetheless, it was Russia’s Kiselev, a former weekly news anchor, who complained of a new media environment where “information noise is created so that we have too much information and we get lost in it. Some of it is false, intended to confuse the truth.”

Russian President Vladimir Putin, who appointed Kiselev, made a surprise visit to the conference, encouraging journalists to tell the story of Russia’s “rich culture and [successful] economy.” One of the most interesting parts of my visit was a small, private dinner with Russian Foreign Minister Sergey Lavrov. The conversation was off the record.

The takeaway, for me, was how journalists around the world describe similar techniques being used to marginalize and controversialize their reporting.

They include bloggers who secretly work for government or special interests and who publish attacks on journalists and their work. The same interests use fake Twitter and Facebook accounts to launch vicious harassment campaigns, and troll online articles to divert and control “comment” sections.