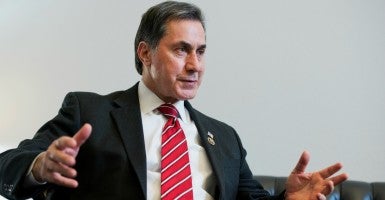 Rep. Gary Palmer, R-Ala., is right to take on the crony capitalists who back the Jones Act. (Photo: Tom Williams/CQ Roll Call/Newscom)

Rep. Gary Palmer, R-Ala., recently proposed an amendment to legislation on Puerto Rico that would exempt the island from the Jones Act. The Merchant Marine Act of 1920, also known as the Jones Act, requires vessels transporting goods within the United States to be U.S.-built, U.S.-owned, and at least 75 percent U.S.-crewed. According to the U.S. government:

The intent of the coastwise laws, including the Jones Act, was to protect U.S. shipping interests. The coastwise laws are highly protectionist provisions that are intended to create a ‘coastwise monopoly’ in order to protect and develop the American merchant marine, shipbuilding, etc.

One consequence of this law has been higher prices to transport cargo within the United States. This is especially true for places like Puerto Rico that rely on waterborne transportation.

According to a Federal Reserve Bank of New York report, it is relatively costly to transport goods between the continental United States and Puerto Rico: “Much of this high cost is attributable to the Jones Act—also known as the Merchant Marine Act of 1920—which imposes restrictions on goods shipped between Puerto Rico and the mainland.”

Similarly, economists Anne O. Krueger, Ranjit Teja, and Andrew Wolfe concluded in 2015: “All islands, remote from the centers of economic activity, suffer from high transportation costs. But Puerto Rico does so disproportionately, with import costs at least twice as high as in neighboring islands on account of the Jones Act, which forces all shipping to and from U.S. ports to be conducted with U.S. vessels and crews.”

Palmer has taken on backers of the protectionist Jones Act by proposing an exemption for Puerto Rico, much like the exemption that’s already in place for the U.S. Virgin Islands and American Samoa.

As Heritage Foundation experts have pointed out, exempting Puerto Rico from the Jones Act’s protectionist provisions would be like “effectively giving everyone on the island a raise.” Palmer added, “Relief from the Jones Act would allow the cost of living in Puerto Rico to decline, allowing residents to stretch their wages further than before.”

He is right to take on the crony capitalists who back the Jones Act.