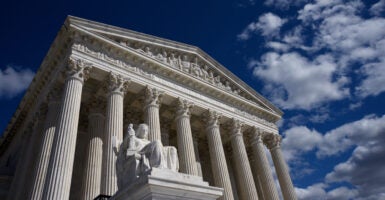 The outcome of the decision in Merrill v. Milligan will have major ramifications when states next redraw congressional maps.(Photo: Robert Alexander/Getty Images)

Section 2 of the Voting Rights Act, which took center stage Tuesday during oral arguments at the Supreme Court, prohibits a state from imposing a “standard, practice, or procedure” that “results in a denial or abridgement of the right of any citizen of the United States to vote on account of race or color … .”

Courts have found that states violate this provision when they draw new legislative districts that dilute the voting power of minority voters by either packing as many of these voters as possible into a single district or by splitting these voters among various other districts—practices known as “packing” and “cracking” voters.

In fact, that’s exactly what the plaintiffs who sued Alabama after the state enacted its 2020 congressional redistricting plan alleged.

Alabama lawmakers allocated the state’s seven congressional seats after the most recent census and drew one majority-minority district. These plaintiffs alleged, and a lower federal court agreed, that the state Legislature should have drawn a second majority-minority district and that its failure to do so violated Section 2 of the Voting Rights Act.

Alabama, of course, disagreed and asked the Supreme Court to review the case. It agreed and heard arguments Tuesday in the case, Merrill v. Milligan.

While Alabama made sweeping claims that in determining whether a Section 2 violation occurred, the court should focus on whether the Legislature directly exhibited discriminatory intent, rather than simply focusing on any discriminatory results, several of the justices—even the conservative justices—seemed skeptical of that position.

Instead, they seemed interested in refining and clarifying the test that the court first laid out as being applicable to these types of cases in the 1986 case of Thornburg v. Gingles.

Courts must then consider the “totality of the circumstances” by applying what are called the “Senate Factors,” which are a series of questions that must be reviewed and answered to determine if there was discrimination involved in what happened. Factors include whether racial appeals were used in campaigns and whether there is a recent history of racial discrimination in other areas besides voting.

But what exactly must be shown under each of the three preconditions and the Senate Factors is unclear and to what extent legitimate redistricting considerations like compactness negate those Senate Factors have been given differing and subjective interpretations by the lower federal courts.

It is also important to note that Section 2 specifically says that it does not entitle racial minority groups to proportional representation.

In other words, just because a racial group, for example, is 25% of a state’s population, does not entitle it to 25% of all elected seats. The Voting Rights Act protects equality of opportunity, not equality of results.

At the oral arguments, several of the justices homed in on Alabama’s argument that requiring the state to establish a second majority-minority district would obliterate the compactness requirement under the first prong of the test.

These justices also seemed receptive to Alabama’s claim that requiring a second majority-minority district would force the state to consider race as the predominate factor when drawing new district maps to the exclusion of being able to consider other neutral traditional redistricting factors such as keeping communities of interest together.

The Supreme Court has previously held that using race as the predominate factor in redistricting violates the one-person, one-vote standard of the equal protection clause of the 14th Amendment.

Of course, some of the justices—including the newly appointed Ketanji Brown Jackson—seemed more interested in making long soliloquies instead of truly questioning the advocates.

While not explicitly addressed, it’s important to note that Alabama’s congressional maps have remained essentially unchanged since 1992 when they were drawn up and approved by a federal court. Both the Bush Justice Department and the Obama Justice Department approved very similar maps drawn up after the 2000 and 2010 census when Section 5 of the Voting Rights Act was still in place.

Regardless of what happens with this case, it’s clear that the outcome will have major ramifications when states next redraw their congressional maps. Hopefully the court will establish clear rules that will not leave legislators guessing whether they will be hauled into federal court and accused of drawing discriminatory districts.