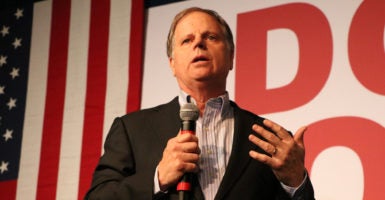 Prior to the allegations of sexual misconduct Moore faced, the state was seen as an almost sure win for a Republican candidate. President Donald Trump won Alabama by almost 28 percentage points in 2016 and there has not been a Democrat senator in 25 years representing the solidly red state.

A Jones win will hurt the conservative agenda, Brian Darling, a former staffer for Sen. Rand Paul, said in an email to The Daily Signal.

“This development empowers the moderates in the Senate in a way that will halt progress on a free market conservative agenda,” Darling, president of Liberty Government Affairs, said. “It is sad that the Republican leadership has proven so incompetent in implementing an agenda promoting free markets, lower taxes and a limited government [and] that has now become even harder to pass.”

After Jones is sworn in, there will be 49 Democrat senators and 51 Republican senators.

Moore, 70, who ran on a conservative platform that included support for a border wall and repealing Obamacare, faced sexual misconduct allegations from at least nine women, “including claims he tried dating them when they were teenagers and he was in his 30s,” according to CBS News.

One woman, Leigh Corfman, accused Moore of inappropriately touching her when she was 14 years old and another, Beverly Young Nelson, alleged that Moore sexually assaulted her.

“I did not know them,” Moore said in an interview Sunday with “The Voice of Alabama Politics.” “I had no encounter with them. I never molested anyone, and for them to say that, I don’t know why they’re saying it, but it’s not true.”

Jones, 63, is a lawyer and former U.S. attorney for the Northern District of Alabama appointed by President Bill Clinton. His campaign platform included support for Obamacare, while acknowledging that it “needs improvement,” and he supports abortion and LGBT rights.

He has also been critical of the Senate’s tax reform plan.

“I am troubled by tax breaks for the wealthy, which seem to be in this bill overloaded,” Jones said. “I’m troubled by what appears to be ultimately tax increases or no tax cuts to the middle class. I generally try to support cutting corporate taxes to try to get reinvestment back into this country.”

Trump, who had supported Sen. Luther Strange in the primary, backed Moore in the general election and recorded a robo call for his campaign.

“Democrat Jones is soft on crime, weak on immigration, supports abortion, he’s bad for our military and bad for our vets,” Trump said during the call. “We don’t want him, and he also, by the way, wants higher taxes. Roy Moore is the guy we need to pass our ‘Make America Great Again’ agenda. Roy is a conservative who’ll help me steer this country back on track after eight years of the Obama disaster.”

Congratulations to Doug Jones on a hard fought victory. The write-in votes played a very big factor, but a win is a win. The people of Alabama are great, and the Republicans will have another shot at this seat in a very short period of time. It never ends!

After the allegations against Moore surfaced, some Republicans in Congress, including Sen. Jeff Flake, R-Ariz., and Sen Ben Sasse, R-Neb., withdrew support for Moore.

No.
(Now please get back to football and other unifying topics…) https://t.co/5W5PpF7c3a

“I had hoped earlier that he would withdraw as a candidate, and obviously it’s not going to happen,” McConnell said Dec. 5 of Moore. “If he were to be elected, he would immediately have an ethics committee case, and the committee would take a look at the situation and give us advice.”

Some Republicans, like Sen. Cory Gardner, R-Colo., said the Senate should expel Moore should he take office.

Alabama Gov. Kay Ivey, a Republican, said Nov. 17 she would vote for Moore, while Sen. Richard Shelby of Alabama, also Republican, announced this month he would not back Moore.

“We need to have a Republican in the United States Senate to vote on things like the Supreme Court justices, other appointments the Senate has to confirm and make major decisions,” Ivey said. “So that’s what I plan to do, vote for Republican nominee Roy Moore.”

“I think, so many accusations, so many cuts, so many drip, drip, drip—when it got to the 14-year-old’s story, that was enough for me. I said I can’t vote for Roy Moore,” Shelby added.

The special election was held for the Senate seat vacated by Republican Jeff Sessions when he became attorney general in the Trump administration.