Conservative Senator Is Trying to Keep Women Out of the Draft 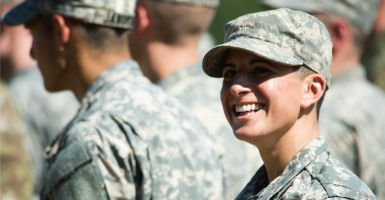 Some Republicans argue that if women can serve in combat, they should naturally be eligible for the draft if it were brought back. (Photo: Polaris/Newscom)

To Sen. Mike Lee, the battle over whether women should have to register for a draft that does not exist is more consequential than it sounds.

Though the U.S. has had an all-volunteer force since 1973, some Republicans are using this year’s defense policy bill to try to require women to sign up for the Selective Service System, compelling them to serve in the military if a draft were ever reinstated.

Supporters of the provision of the National Defense Authorization Act expanding Selective Service to women are doing so in the name of inclusivity, arguing that if women are able to serve in combat—which they can—they should naturally be eligible for the draft if it were brought back.

But as senators debate the annual defense policy bill this week, conservatives like Lee are fighting back, arguing that forcing women into the Selective Service would actually restrict their freedoms.

“It’s one thing for women who want to be in combat and have earned it to do that, but forcing women to fight is a totally different matter,” said Lee, R-Utah, in an interview with The Daily Signal.

This has nothing to do with opportunities for women in the military. This has to do with whether we should put women in a position where they are forced to register for the Selective Service, and when you are doing that, you are submitting them to a future draft. That’s a totally different question and that’s a question that has yet to be adequately studied or considered by Congress in a manner I think it deserves. My amendment preserves choices that women currently have—choices that would be taken away if the language in the base bill were to become law.

Lee wrote an amendment to the National Defense Authorization Act that would remove the provision that requires women to register for the Selective Service. The amendment also forces the Pentagon to prepare a report for Congress by July 2017 about whether the Selective Service is even necessary and if registration should be required regardless of gender.

“It’s one thing for women who want to be in combat and have earned it to do that, but forcing women to fight is a totally different matter,” says @SenMikeLee.

The amendment, one of nearly 400 proposed to the defense policy bill, is also sponsored by GOP Sens. Ted Cruz of Texas, James Inhofe of Oklahoma, Mike Rounds of South Dakota, Ben Sasse of Nebraska, and Roger Wicker of Mississippi.

Extending the Selective Service to women has powerful Republican backers, including Senate Majority Leader Mitch McConnell of Kentucky and Sens. John McCain of Arizona and Lindsey Graham of South Carolina.

In addition, military leaders from the Army and Marine Corps testified before Congress in February voicing support for requiring women to register with the Selective Service.

The Selective Service System was created to ensure the military has enough manpower when it is short-handed in a time of war.

The Selective Service System currently requires registration of men ages 18-25 only. But when the Obama administration opened military combat roles to women in December 2015, supporters saw gender neutrality in draft eligibility as a logical next step.

“Because the Department of Defense has lifted the ban on women serving in ground combat units, the committee believes there is no further justification in limiting the duty to register under the Military Selective Service Act to men,” wrote the Senate Armed Services Committee, which drafted the National Defense Authorization Act, in its executive summary to the bill.

When the House passed its version of the National Defense Authorization last month, opponents of expanding the Selective Service to women were successful in stripping the provision from the bill. Sen. Mike Lee, R-Utah, is trying to stop an effort by some Republicans to require women to register for the Selective Service System. (Photo: Bill Clark/CQ Roll Call/Newscom)

Lee hopes for a similar result in the Senate, and not just because he disagrees with the underlying policy.

The Utah senator is also concerned with a separate provision of the National Defense Authorization Act that would create a “National Commission on Military, National, and Public Service” to review the future of the Selective Service System. The commission would also “consider methods to increase participation in military, national, and public service in order to address national security and other public service needs of the nation.”

While backers of that provision, including McCain and Graham, say the commission is meant to increase interest in the U.S.’ system of an all-volunteer military force, Lee alleges his colleagues are trying to “open the door” to mandatory service making a comeback.

“I think the current NDAA calling for a study on national service is laying the groundwork for a mandatory national service draft,” Lee said. “Based on my reading of the language of the base bill, I certainly think that is a risk. I have some concerns about that. Voluntary service is an indispensable part of what makes America exceptional and mandatory service would destroy all of that.”

An aide to a senator who supports the commission denied Lee’s accusation.

“That’s an absurd argument,” the aide said. “No one is suggesting that we bring back mandatory service except for Senator Lee. The provision that would create the commission was included to study if we even still need a draft due to the success of the all-volunteer force.”

No matter the intent of the commission, and the push to require women to join the Selective Service, Lee agrees the nature of how the U.S. assembles its military is due for fresh scrutiny.

It’s still unclear when — or if — Lee’s amendment stopping the expansion of Selective Service to women will be voted on. McConnell has said he hopes to finish work on the National Defense Authorization Act this week.