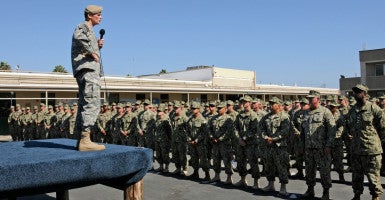 The Senate is debating the National Defense Authorization Act, which sets polices and the budget for the Defense Department. (Photo: Polaris/Newscom)

At a time when the U.S. is in combat in Afghanistan, Iraq, and Syria, while facing the constraints of sequestration, Sen. John McCain is setting up a dramatic debate on defense spending as he and his colleagues consider the annual defense policy bill.

On Wednesday, citing what he calls a “dangerous mismatch” between worldwide threats, and congressionally prescribed limits on spending to respond to them, McCain offered an amendment to the National Defense Authorization Act that would add $17 billion to the Pentagon budget.

Defense budget experts say this is the first time since the Budget Control Act of 2011—which cut $487 billion from projected defense spending over a decade—where lawmakers have the chance to take a stand-alone vote on defense spending.

“We have been at war for 14 years now, and I have never seen more threats to our nation than I do today,” Sen. Lindsey Graham, R-S.C., said in an interview with The Daily Signal.

“Our national security needs are tremendous and growing, but when it comes to readiness and safety, we are compromising our forces with arbitrary defense cuts,” Graham said. “We are into the bone now, not cutting the fat, so the McCain amendment will ask for $17 billion in spending to deal with the problems we have in keeping our force ready to fight. This will be an emergency spending appropriation, and I think it truly is an emergency.”

Up or Down Vote

The National Defense Authorization Act sets the policies and budget for the Department of Defense, but it does not actually obligate any funding. This year’s bill authorizes $602 billion in spending, a topline figure that abides by the two-year Bipartisan Budget Act negotiated last year by former House Speaker John Boehner and President Barack Obama.

The Senate began debating the bill this week, but won’t begin acting on it until after Congress returns from its Memorial Day recess, which began Thursday.

McCain’s amendment to the bill would dedicate the $17 billion additional defense spending to various areas, including upping troop levels and raising their pay, paying for new equipment, and procuring more aircraft.

All of the extra money is added through the Overseas Contingency Operations account — referred to as war funds — which is separate from normal operating spending and does not count against the budget caps.

“This could be the first straight up or down vote since 2011 where there is just a vote on increasing defense funding,” Justin Johnson, a senior defense policy analyst at The Heritage Foundation, said. “It would be an interesting debate given the readiness challenges the military is facing and the security challenges the country is facing.”

McCain’s effort will likely be opposed by Senate Democrats, and libertarian-minded Republicans, because the new spending is not offset by cuts elsewhere in the budget.

“We’re going to hold Republicans to their word on the budget agreement,” Senate Minority Leader Harry Reid, D-Nev., said Wednesday. “We’re going to do our job as we want them to do theirs. Our armed forces and middle-class Americans deserve nothing else.”

Since Congress enacted the Budget Control Act, Democrats have demanded that each additional defense dollar be matched with equal domestic spending.

Earlier this month, the House passed its version of the National Defense Authorization Act, authorizing $610 billion in defense funding.

The House took a different approach than the Senate is planning, by taking $23 billion from the Overseas Contingency Operations war account, and using it for what Republicans said was a shortfall in the Pentagon’s base budget, for things like jets, ships, and troops.

The White House has threatened to veto the House bill for robbing the overseas war account, and leaving only enough money to keep military efforts in Afghanistan and the fight against ISIS funded through April. Defense budget experts say these different approaches to increase defense spending will likely at least give hawks some of what they want, but only with some concessions.

“Even if this [McCain’s amendment] makes its way into appropriations language, once you talk about increasing defense spending, it will almost certainly become an issue that is intertwined with non-defense spending,” Todd Harrison, the director of defense budget analysis at the Center for Strategic and International Studies, said.

“Where we’re headed in the defense debate is that both chambers are putting upper pressure on defense, and at the end of the day, they will probably succeed in some increase, but not the amount they are asking for,” Harrison told The Daily Signal. “The price they will pay is more spending in non-defense.”

Graham told The Daily Signal he would not support the additional defense spending if it meant a “tit-for-tat” increase in funding for domestic purposes.

“It’s a gun versus butter debate,” Graham said. “We have a hell of an argument to make that this truly is an emergency in terms of military readiness. It is up to the Democrats to prove that other elements of the government are in such a state of emergency.”

“The Democratic view is that all things in government are of equal importance and priority,” Graham added. “My view is our No. 1 priority is to defend the nation, and to put our serving men and women at risk, and to hold their needs hostage for non-defense reasons, is unconscionable.”

Harrison argues that the biggest concern for policymakers should be how efficiently they use defense resources, rather than how much they spend on them.

He says that Congress has some “tough decisions to make” about whether to close excess military bases, and should consider the most efficient way to pay troops, and their escalating health care needs, at a time when personnel costs are higher than ever, even though overall troop levels are down.

“I would caution people against using apocalyptic rhetoric to describe our defense situation,” Harrison said. “Regardless of what happens, the United States will be secure. The real question is on the margins, do we have more advanced capabilities sooner rather than later, and how effective are we at spending the money we do have? If we let costs escalate on the trend we are on, we will get to a point where we can’t afford a force of a sufficient size. That’s when you will see the real impact.”