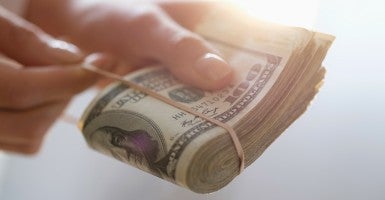 Data published by the Bureau of Labor Statistics shows American workers’ share of income continually falling. Although some pundits looked at these numbers and concluded the economy has shifted against workers, labor economist James Sherk says a deeper look at the data reveals that in fact many workers take home about what their counterparts did in 1948.

“Every dollar earned or spent ultimately goes to labor or capital,” Sherk, a research fellow in labor economics at The Heritage Foundation, wrote in a recent report.

“For example, the money that drivers spend on gas goes toward paying the employees who drilled, refined, and transported that oil or the shareholders of the companies they work for. Economists call the proportion of income going to employees the ‘labor share of income.’”

Sherk, who spoke about the issue Tuesday at a Heritage Foundation event, estimates that today’s workers take home the same proportion of net income today as they did in the years following World War II.

Net income is what remains after expenses such as maintenance repairs and software updates. It reflects the resources available for workers or business owners to actually consume, he says.

Sherk attributes the increase in depreciation expenses over recent decades in part to the vast use of technology in the workplace. For example, computers wear out quickly and are in constant need of repair or replacement. This cost is something that simply didn’t exist before computers were introduced into the American office.

“This is just an incredibly important policy issue,” Scott Winship, the Walter B. Wriston fellow at the Manhattan Institute, said during the Heritage event in regard to the Bureau of Labor Statistics’ data.

Sherk explained that the bureau has changed how it measures self-employment income.

This revised measurement reduced labor’s share of income despite nothing actually changing in the economy.

“Adjusting for depreciation and self-employment [measurement changes] shows that workers take home the same proportion of net income today as they did in 1948,” Sherk wrote.

Veronique de Rugy, senior research fellow at the Mercatus Center at George Mason University, said Sherk’s and Winship’s research is “debunking a lot of things that are conventional wisdom” among some economics commentators.

“They help this conventional wisdom actually move towards the truth,” de Rugy said.

Winship emphasized the importance of changing the Bureau of Labor Statistics’ standard in order to reshape the conventional wisdom that labor’s share of income is devastatingly low.

“Some people have an interest in showing that things look like they’re getting worse, or that they’re not getting better as rapidly as they actually are” to push a certain political agenda, Winship said.

I think it’s important that the change [in the agency’s standard] does happen, and hopefully it comes about by enough of us pointing out what the basic facts are.