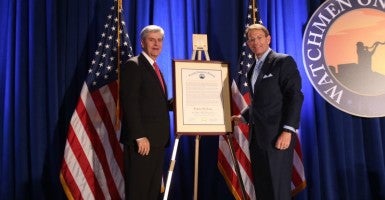 Mississippi Gov. Phil Bryant received a religious freedom award Thursday evening in Washington, D.C., for his courage to protect and stand up for the religious rights of citizens in his state.

“We want to honor those who have courage,” Family Research Council President Tony Perkins said.

Perkins honored Bryant, a Republican, with the Family Research Council’s first ever Samuel Adams Religious Freedom Award during an annual Watchmen on the Wall conference for pastors around the country.

“I am simply a Christian doing his duty as God has given him the right to do so,” Bryant said Thursday evening at the award presentation.

In Mississippi, Bryant signed the Religious Freedom Restoration Act in 2014, which says the government cannot place a “burden” on a person’s exercise of religion and added “In God We Trust” to the state seal. This year, Bryant signed the Protecting Freedom of Conscience from Government Discrimination Act, guaranteeing religious freedom in light of the Supreme Court redefining marriage last year.

“You are not the only ministers that God has called,” Perkins told the pastors in attendance. “God has also called ministers to government.”

Perkins explained that Founding Father Samuel Adams’ “faith was so central to who he was,” and that “he, more than any of the other of the founders integrated his faith with his public walk and it had a profound impact on everyone around him.” Perkins said:

Samuel Adams was a man of average stature but a giant of American patriotism. Historians have called him the Father of the Revolution; his contemporaries also acknowledge his leading role, as Thomas Jefferson called him ‘the helmsman of the American Revolution.’ Adams organized the Boston Tea Party, signed the Declaration of Independence, and served as governor of the state of Massachusetts, making numerous proclamations calling for prayer.

“Courage is in short supply in politics,” Perkins said.

“Targeted by those who wish to advance a radical social agenda, Gov. Bryant has stood firm and unequivocal in defending religious liberty for the citizens of Mississippi,” Perkins said. “Inflexible in matters of truth, yet committed to the welfare of his fellow man, Phil Bryant embodies the kind of leader Samuel Adams envisioned to sustain virtue in public life and freedom in public law.”

Mississippi came under fire for passing the religious liberty bill from left-leaning organizations and big businesses, including abortion giant Planned Parenthood. “This is a movement, a social political movement, that wishes to make sure that we have no religious accommodations,” Bryant said.

Ryan T. Anderson, the William E. Simon senior research fellow in American Principles and Public Policy at The Heritage Foundation, wrote in an op-ed for The Daily Signal:

In other states where marriage had been redefined, citizens and religious organizations who continued believing that marriage was a union of husband and wife have been penalized by the government. Bakers and florists have been fined, adoption agencies shuttered. So the citizens of Mississippi have acted to make sure it never happens in their state.

“If we are going to stand, now is the time and this is the place,” Bryant said. He added:

I’m simply a young boy from Moorehead, Mississippi, who by the grace of God, had the great opportunity of being governor of the state of Mississippi. During that time, the Lord has bestowed upon me great blessings…The Lord also gave me great challenges. About 60 days ago it seems as if all of the secular, progressive world had decided that they were going to pour their anger and frustration [upon Mississippi].

“I pray that I get more opportunities to stand and show that we will not be clawed at, neither in the nighttime or in the day. And thank the Lord that he has given me an opportunity to stand on that wall,” Bryant said.