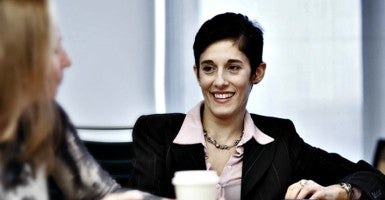 The Senate is set to vote May 16 on confirming Paula Xinis to a federal judgeship in Maryland. (Photo: American Society of Legal Advocates)

President Barack Obama has not been able to move his Supreme Court nominee, Merrick Garland, through the Senate but Republicans continue to advance the president’s lower court nominees.

The chamber on Monday is set to take up the nomination of Paula Xinis, a partner and senior trial attorney at Murphy, Falcon & Murphy—the Baltimore law firm that secured a $6.4 million settlement from the city of Baltimore in September in the wrongful death case of Freddie Gray.

If confirmed as a U.S. District Court judge for Maryland, Xinis, 47, could serve on the bench for life.

In April 2015, after being arrested for possessing an illegal switchblade, Gray, 25, received a spinal cord injury in the back of a police van and died a week later. Gray had a lengthy criminal record.

A medical examiner ruled Gray’s death a homicide. His death drew national attention after sparking riots, arson, and vandalism in West Baltimore as well as peaceful protests. Trials continue for the six police officers charged in the case.

Though Senate Republican leadership has vowed to stop any Supreme Court nominees, they’ve promised to evaluate each of Obama’s picks for federal circuit and district courts.

Obama nominated Xinis more than a year ago. She would be the second lower court nominee confirmed since Senate Republicans began their blockade of Supreme Court candidates after the Feb. 13 death of Justice Antonin Scalia, a conservative.

Five months earlier, on Sept. 17, the Judiciary Committee by voice vote approved her for the District Court seat in Greenbelt.

The vote on Xinis by the full Senate coincides with the beginning of National Police Week. Xinis served as a complaint examiner for the District of Columbia’s Office of Police Complaints. From 2005 to 2011, Xinis issued six opinions, ruling against the accused officer in each case.

One case involved an arrest for disorderly conduct in 2011. After ignoring a police order to move along, a District man began cursing at officers outside a local supermarket. A witness reported that the man “became verbally abusive.” But Xinis upheld a charge of harassment against the officer, ruling that “the arrest was baseless.”

Sen. Jeff Sessions, R-Ala., noting her employment with Murphy, Falcon & Murphy, questioned Xinis about such opinions during a Judiciary Committee hearing on July 15, 2015.

Xinis, also a former public defender, said her job was to review cases before her, adding that she has a reputation for open-mindedness and integrity, according to a live blog of the proceedings.

“Can you assure police officers in Baltimore and all over Maryland that might be brought before your court that they’ll get a fair day in court, and that your history would not impact your decision-making?” Sessions asked.

Xinis, of University Park, replied that a well-trained judge has no agenda, and she wouldn’t have one. [Her appearance begins at 29:15 in this committee video.]

Xinis joined Murphy, Falcon & Murphy in 2011 and made partner in 2013. As a trial lawyer in private practice, she has won several cases involving civil rights and police brutality. She won a $5 million settlement from Camden County, New Jersey, for an incident that occurred after a police dog attacked a suspect, causing neurological damage.

According to the New Jersey Law Journal, Xinis and a partnering lawyer collected $1.54 million in attorney fees.

In Ms. Xinis is a tenacious, and meticulous advocate for her clients with fourteen years of prior experience as an Assistant Federal Public Defender representing individuals charged with the most complex and serious federal crimes, including wire, mail and bank fraud, public corruption, Trade Embargo violations, bribery, tax evasion, as well as drug conspiracies and firearms offenses.a profile, the American Society of Legal Advocates wrote of her criminal defense work:

Ms. Xinis is a tenacious, and meticulous advocate for her clients with 14 years of prior experience as an assistant federal public defender representing individuals charged with the most complex and serious federal crimes, including wire, mail and bank fraud, public corruption, trade embargo violations, bribery, tax evasion, as well as drug conspiracies and firearms offenses.

A spokeswoman for Murphy, Falcon & Murphy told The Daily Signal that the firm would not respond to questions about Xinis until after Monday’s vote.

Before passing the bar, Xinis received her undergraduate degree from the University of Virginia in 1991 and graduated from Yale Law School in 1997.

She began her legal career when she clerked in 1998 for Judge Diana Gribbon Motz on the 4th U.S. Circuit Court of Appeals. Motz, an appointee of President Bill Clinton, personally recommended Xinis for the U.S. District Court bench in Maryland.