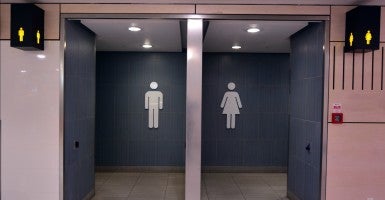 “If a teenage boy who says he’s a girl goes into the girls’ bathroom and the girls feel uncomfortable, all of the girls have to line up at the single stall restroom—not the boy,” a petition against new transgender student guidelines in Fort Worth, Texas, schools says. (Photo: Rafael Ben-Ari/Chameleons Eye/Photoshot/Newscom)

Texas Lt. Gov. Dan Patrick has called for school superintendent Kent Scribner’s resignation after Scribner adopted new transgender student guidelines for his district, without the input of parents, school board members, and others in the community.

“The district did not seek any public comment or input from parents or the public,” Fort Worth resident Julia Keyes, a 35-year-old mother of five children, told The Daily Signal. “The board did not even get to vote on the policy.”

The new guidelines, approved April 19 by Scribner, the Fort Worth Independent School District superintendent, allow students to use the male or female restroom of their choice. Scribner announced the guidelines April 26 at a school district board of trustees’ meeting, according to the Texas Tribune.

The local reaction is strongly against this for two reasons—the way it was adopted and the substance of what was adopted. Even people who may agree with the substance are saying they disagree with the way it was done under the radar and without public comment or board approval. Many parents are outraged at the way school personnel are instructed to assess whether to include parents of students who may be “transitioning” in the conversation of their own child’s gender issues.

The new guidelines say that school personnel should address a student by the name or gender pronoun they prefer, even without parent or guardian permission.

“The guidelines go far beyond bathroom issues,” Keyes said. “School personnel are instructed to no longer call boys and girls ‘boys and girls.’ This seems like an infringement on speech.”

Patrick, a Republican, announced last month that he is boycotting Target after the retail chain proclaimed a new policy that allows individuals to use the restroom or fitting room of their choice.

Patrick held a press conference Tuesday evening in Fort Worth before a school board meeting, saying that he does not support a policy that gives special treatment to transgender students.

“Campus safety should be of paramount concern for anyone in his [Scribner’s] position,” Patrick said in a statement Monday. “Every parent, especially those of young girls, should be outraged.”

“I call upon the parents within the Fort Worth ISD to take immediate steps to repeal this stealthy scheme and remove Dr. Scribner from his post.”

Scribner has said he has no intention of resigning, the Fort Worth Star-Telegram reported.

An online petition started on May 5 by “concerned citizens” calling for the revoke of the guidelines has over 1,400 supporters.

“We have read the new transgender student guidelines. In short, the eight pages are an astonishing and shocking rebuttal to common sense, history, and science,” the petition says.

Under the section “Restrooms and Related Facilities,” boys who self-identify as girls may now use girls’ restrooms and ‘if other students feel uncomfortable sharing a restroom with a transgender student, the school must allow the student(s) access to a single stall restroom…the single user restroom, however, must not be given as the only option for transgender students.’  Thus, if a teenage boy who says he’s a girl goes into the girls’ bathroom and the girls feel uncomfortable, all of the girls have to line up at the single stall restroom—not the boy.

“I am proud of the guidelines that we’ve developed,” Scribner said May 10 during a school board meeting. “This is not a bathroom policy. These are guidelines that simply provide campus personnel with the direction to support all kids in a balanced and dignified way.”

A Fort Worth school district spokesperson told The Daily Signal that the district is only responding to inquiries about the new transgender student guidelines with a statement from Jacinto Ramos Jr., the board president.

Rest assured, the safety of all children is our highest priority on the Board. We are completely capable of handling this in Fort Worth. We are applying the existing policy to make sure all children feel safe at school. We are here to look out for all children; not some, not most, but all children.

The policy provides that ‘school personnel may only share this information [regarding the student’s actual or perceived gender identity and expression] on a need-to-know basis as the student directs. This includes sharing information with the student’s parents or guardian.

Patrick and Paxton are “blinded by transphobia,” says Equality Texas, a lesbian, gay, bisexual, and transgender organization. Steven M. Rudner, chairman of the board at Equality Texas, said in a statement:

The policy about which we are here today is not a new policy. It was adopted years ago; the superintendent has merely drafted regulations implementing a longstanding policy. The only news here is that the lieutenant governor has decided to pick on transgender kids, to gain political points.

“We are deeply concerned about the Fort Worth ISD implementing sweeping new and retroactive transgendered policy changes without debate or vote from an open school board meeting,” Cindy Asmussen, the Texas ethics and religious liberty adviser at the Southern Baptist of Texas Convention, told The Daily Signal. “These new guidelines are not required by federal or state law, and in fact some of the new guidelines may violate state law.”

There are issues of free speech and religious liberty violations and the employees are told they will suffer adverse employment action should they not use the sanctioned gender speech. The parents of the school district had no input or representation regarding these major changes for their children either. Their child’s gender expression on campus will be withheld from the parents, and there will be full access to the locker rooms and bathrooms of the opposite sex. We believe it is critical for the Fort Worth, [Texas,] community to let their voices be heard and work to revoke these dangerous new policies.

Jonathan Saenz, the president of  Texas Values, a nonprofit organization that supports Christian values, has called the policy a “dangerous bathroom and locker room policy.”

“We are shocked with all the controversy in our state and around the country on this matter that the [Fort Worth Independent School District] would make such a drastic change without the input of parents and a long, thorough, vetting process,” Nicole Hudgens, a policy analyst at Texas Values, told The Daily Signal. “It appears there has been a conscious effort to not let the parents be involved.”

We call on the [Fort Worth Independent School District] to rescind this policy immediately until a transparent and open discussion takes place. It has come to our attention that parents have started a petition drive to have a voice on this issue. This is just the beginning.