The Conservative Lessons of ‘Captain America’ 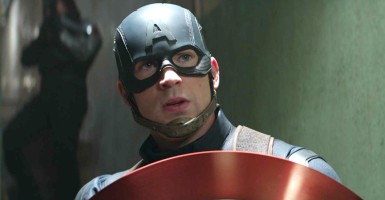 Daniel Woltornist is the senior communications manager, national security for The Heritage Foundation.

Loki, Ultron, Red Skull, and Hydra—moviegoers might be familiar by now with the list of Marvel Comics’ villains. But in “Captain America: Civil War,” the latest film in the Avengers series, Marvel introduces perhaps the most dangerous of them all—the United Nations.

While the Avengers are well versed in handling enemies with powers like super strength, shape shifting, and power beams, the United Nations’ powers of regulation and sovereignty usurpation represents their toughest foe yet.

Here’s the gist of the movie—the free market does something well and the government comes in to “fix” it. And—shockingly—the government wrecks everything.

Despite the best attempts of villains in previous Avengers movies, the film begins with Earth in one piece. The world isn’t occupied by Loki or an alien army—thanks to the Avengers. (In a universe of super-powered baddies, that’s not a short order.)

Does this mean that the bad guys aren’t doing bad things? Certainly not, the Avengers have consistent hero housekeeping tasks to maintain the status quo, which sometimes proves messy.

But before you know it—the U.N. is knocking at the Avengers’ front door telling them that they aren’t doing a good enough job staving off world catastrophes like alien invasions and complete annihilation.

To force the Avengers to do their job better, the “Sokovia Accords” are signed by 117 countries to put the Avengers under U.N. jurisdiction. This is a great idea because when aliens invade next, let’s have the U.N. debate if the Avengers should fight the alien invasion.

If it turns out anything like regular U.N. deliberations, the Avengers would never be used again because Russia or China negotiated a backroom deal with the aliens so that they would be global governors in the new alien world order.

Presented with the Sokovia Accords, the Avengers are split between those who want to maintain the status quo and those who wish to effectively handcuff the organization with regulation.

Suddenly, the accords are ratified and the Avengers who don’t “go along to get along” are made fugitives or imprisoned against their will.

As usual, big business and big government team up to advance their collective interest. Tony Stark, who made his billions off government contracts (he was what some would call a crony capitalist before becoming Iron Man), assembles his team with a being created by his company (named Vision), a pilot to whom Stark Industries gave a super suit (War Machine), a kid who was given a new costume courtesy of Stark Industries (Spider-Man), and the head of one of the nations who brokered the Sokovia Accords (Black Panther).

While all of this seems like whatever is the superhero equivalent of “First World problems,” these issues of sovereignty and crony capitalism are familiar to most Americans.

Most recently, Secretary of State John Kerry came back from Paris and told Congress that it could not vote on a U.N. climate treaty. The U.S. will be subject to a U.N. climate panel that will dictate U.S. climate policy even though it received no prior consent. As The Heritage Foundation’s Nick Loris has argued:

The [U.N.] Green Climate Fund is nothing more than a taxpayer-funded wealth transfer from developed countries to developing ones. The fund will do little to promote economic growth in these countries but instead connect politically-connected companies with taxpayer dollars.

As with both the Paris climate treaty and the fictional Sokovia Accords, everyone loses out when crony capitalists and government bureaucrats win.

As sovereignty is eroded, forces for good like the Avengers are hampered and frustrated. Freedom fighters with supernatural powers become as ineffective and dysfunctional as the bureaucracies that try to control them.