Should Police Be Able to Take Property Without Charging Owners With a Crime? One Sheriff Race Shows Split on Issue 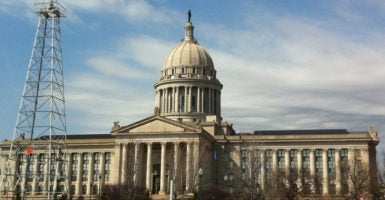 In Canadian County, Oklahoma, two candidates for sheriff found themselves at odds over civil forfeiture, which allows law enforcement to take property if they suspect it's tied to a crime. (Photo: cdshock/Flickr/CC BY 2.0)

In a sheriff’s race in one Oklahoma county, the question of whether police can and should be able to seize people’s property without charging them with a crime emerged as a wedge issue, highlighting the split among law enforcement on a controversial tool known as civil asset forfeiture.

In June, voters hit the polls and were faced with a choice between two candidates for sheriff in the Republican primary in Canadian County: Joshua Moore, a small business owner who spent 13 years working in the Canadian County Sheriff’s Office, and Chris West, the county’s current undersheriff.

Canadian County is the fifth most populous county in Oklahoma, according to the U.S. Census Bureau, and includes parts of Oklahoma City.

According to a 2015 report from the American Civil Liberties Union of Oklahoma, law enforcement in Canadian County seized $2.7 million in 44 cases using civil forfeiture. Criminal charges were filed in 23 of those cases.

The ACLU of Oklahoma examined cash seizures from law enforcement agencies working in 12 counties along Interstate 40, which bisects the state, including Canadian County. In those 12 counties, law enforcement seized $6 million in cash from 2009 to 2014.

Of that $6 million, just $2 million belonged to property owners eventually charged with a crime.

Moore billed himself as the “constitutional choice” and a candidate who wanted to do away with the Canadian County Sheriff’s Department’s ties to the federal government, primarily through the work deputies do with the FBI, Drug Enforcement Administration, and Department of Homeland Security.

West, meanwhile, said he was focused on addressing the county’s overpopulation problem in its jails and campaigned on implementation of community policing and accountability standards, according to the El Reno Tribune.

Moore and West boasted extensive backgrounds in law enforcement, but the two candidates for sheriff differed on an issue that has pitted police chiefs, sheriffs, and prosecutors against groups like the American Civil Liberties Union and The Heritage Foundation: civil asset forfeiture.

“I believe there is a loophole in the law that leaves room for abuse,” Moore, who opposes civil forfeiture, told The Daily Signal. “As a law enforcement officer, we swear an oath to uphold the Constitution, and that should be all parts of the Constitution. This is a clear violation of Fourth and Fifth Amendment rights.”

‘The Burden of Proof Is on Us’

Civil forfeiture is a tool that gives law enforcement the power to seize cash, cars, and property if they suspect it’s tied to a crime.

The procedure was intended to combat drug trafficking and money laundering, and in the mid-1980s, civil forfeiture was expanded to combat the war on drugs.

In recent years, though, there has been growing opposition to law enforcement’s use of civil forfeiture as innocent people have had property seized, yet were never charged with a crime.

And as more of these cases came to light, state legislatures began to turn their attention to the issue.

In Oklahoma, state Sen. Kyle Loveless, R-Oklahoma City, introduced a package in January that would require law enforcement to secure a conviction before forfeiting property.

The bill was fiercely opposed by sheriffs, police chiefs, and prosecutors, and it ultimately died in the Senate Judiciary Committee.

West has stood behind law enforcement’s use of civil forfeiture and called it a “good tool” that is crucial to getting drugs off the streets.

“The way I feel about it is it is either drug money or it’s not. It’s either criminal enterprise money, or it’s not,” he told Fox 25 in February. “The burden of proof is on us.”

West did not respond to The Daily Signal’s interview request.

In addition to requiring a conviction before forfeiting property, Loveless’ bill would have redirected forfeiture proceeds from seizing agencies to a fund controlled by a board that awards grants to drug treatment centers, drug courts, and drug interdiction.

West took issue with that aspect of Loveless’ bill.

“We believe in local solutions to local issues,” he told Tulsa’s News 9 in February. “Leave the money here. We balance our budgets in Canadian County every year. We don’t have a billion-and-a-half deficit.”

Opponents of civil forfeiture, like Moore, believe that the current system—often referred to as “policing for profit”—creates an incentive for law enforcement, since they directly benefit from the cash, cars, and property seized.

“We live in a country where we’re supposed to be innocent until proven guilty,” Moore said. “It becomes more about the money than actually about justice. If it’s truly about justice rather than the money, why not put more protections in place?”

In addition to disagreement about the profit incentive civil forfeiture creates, Moore and West also disagreed on whether the procedure violates constitutional protections, including the right to due process and protection from unreasonable searches and seizures.

“We live in a country where we’re supposed to be innocent until proven guilty,” Moore told The Daily Signal. “If I were an administrator in law enforcement, I would want to know innocent people are protected. Those protections than are going to protect those deputies from ever being accused of [abusing the system].”

But West said cases involving people who don’t admit where the money came from often end up before a judge.

“The process I’m describing here is what is known as due process,” he told Fox 25. “Law enforcement can’t just take an asset or seize an asset on the side of the road and then it is theirs. It doesn’t work like that.”

Despite West’s reassurances, critics of law enforcement’s use of civil forfeiture today said the process leaves property owners left having to prove their property wasn’t tied to a crime, which flips the presumption of innocence on its head.

The Republican primary in Canadian County took place at the end of June, and West—the civil forfeiture supporter—walked away victorious with 71 percent of the vote.

Loveless, who represents part of Canadian County, said Moore made civil forfeiture reform a wedge issue. Since Loveless started looking into issues with civil forfeiture more than a year ago, he said he’s seen it brought up in races beyond the Canadian County sheriff’s race, including elections in Tulsa, Wagoner, and Muskogee counties.

“In legislative races it’s being brought up—state senate races, runoff elections, it’s come up in those,” he said. “We have a lot of pressing issues in Oklahoma, education funding and infrastructure and mental health issues. But the right to people’s property is going to be something that’s always vital. Until we get [forfeiture reform] done, and done right, it’s going to be an issue.”

Loveless said he has already had conversations with West about how they can compromise on reforms to state civil forfeiture laws, and said they’ve already found areas of agreement.

But beyond West, Loveless said he’s seen interest in civil forfeiture reform from rank-and-file officers on the ground. However, the state senator said there’s still a divide between those “on the front lines” and their superiors.

“When I talk to guys with badges that are on the front lines, your normal police officer or detective or the ones dealing with murders and things like that, they’ve told me, yeah, there’s some area for improvement,” he said. “The only group that has come out against reforms are those agencies and offices that receive the funding.”