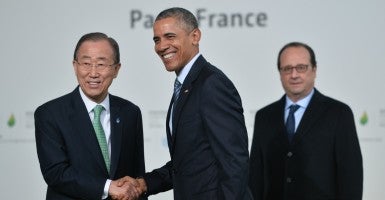 The only reason President Obama is not sending the Paris Climate Agreement to the Senate as a treaty is that he knows the Senate would handily reject it. (Photo: Liewig Christian/Sipa USA/Newscom) 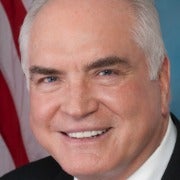 Today at United Nations Headquarters in New York City, Secretary of State John Kerry and representatives of over 130 nations will sign the Framework Convention on Climate Change agreement that was negotiated in Paris last December.

According to President Obama, this “historic agreement” will “hold every country accountable” if they fail to meet its carbon emission targets.

The White House has also acknowledged that the agreement contains “legally binding” provisions designed to create a “long-term framework” that will force the United States and signatory countries to reduce carbon emissions for decades to come.

Despite these facts, President Obama has already announced he will not submit the Paris Climate Agreement to the Senate for advice and consent. Instead, the White House claims the signature environmental achievement of the president’s tenure is just an “international agreement” not meriting Senate attention.

President Obama has chosen to ignore this directive.

Those eight factors are:

4) Past U.S. practice as to similar agreements (the agreement’s predecessor was submitted as a treaty)

7) The proposed duration of the agreement, the need for prompt conclusion of an agreement, and the desirability of concluding a routine or short-term agreement (the agreement sets emissions targets decades in advance)

8) The general international practice as to similar agreements (there are many, but the 1985 Vienna Convention for the Protection of the Ozone Layer is just one example)

The only reason President Obama is not sending the Paris Climate Agreement to the Senate as a treaty is that he knows the Senate would handily reject it.

That is why we have introduced a concurrent resolution in the House and Senate expressing the sense of Congress that the Paris Climate Agreement must be submitted to the Senate as a treaty for its advice and consent.

If President Obama fails to do so, then Congress must prevent its implementation by forbidding any payments to the agreement’s “Green Climate Fund,” an international slush fund included in the Paris agreement to induce developing nations to sign the agreement.

If Congress fails to specifically prohibit taxpayer money from being spent implementing the Paris Climate Agreement, then they will be complicit in President Obama’s subversion of the Constitution.