How Washington Politicians Wasted Billions Trying to ‘Invest in Our Future’ 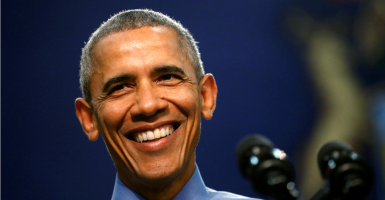 Instead of continuing to fund energy programs almost without hesitation, policymakers should trust that the market will determine the true value of potentially innovative technologies. (Photo: Carlos Barria/Reuters/Newscom)

The federal government has wasted billions on energy projects promising to usher in a new energy future.

All Washington can do is play favorites when picking energy options (think Solyndra).

Despite many attempts to force it, the next energy revolution won’t come from Washington. All Washington can do is play favorites when picking energy options (think Solyndra).

It does this through providing grants, loans, loan guarantees, mandates (like the use of biofuels), and tax subsidies to specific energy technologies—to only name of a few.

Another way in which the government intervenes in the energy market is the annual budget of the Department of Energy. Programs within the Department of Energy supposedly recognize that there’s great potential for wind, solar, fusion, geothermal, biofuels, carbon capturing technology for coal, and much more. These energy sources and technologies themselves may very well be worthy of investment, but that’s not the point. The problem is the government meddling in what is clearly not its role.

The mantra from proponents of government spending on energy is generally the same. To borrow from President Barack Obama, “Rather than subsidize the past, we should invest in the future.”

Half of that statement is correct. Taxpayers shouldn’t subsidize the past. Nor should they “invest” (read: subsidize) in the future. In fact, that’s why the market has investors: to take chances, using their own money, on promising new endeavors. From basic research to full-scale commercialization for any energy technology, every step of the way should be driven by the private sector. Free enterprise will spur the next energy revolution, just as it has the latest oil and gas revolution that’s lowering the cost of living for Americans. Competition will provide incremental improvements in energy, for conventional natural resources and for renewable technologies.

As energy prices rise and fall, markets respond accordingly. Higher prices at the pump, for instance, incentivize companies to extract more oil and invest in technologies to produce the oil more cheaply and efficiently. Higher prices encourage exploration into alternative power sources for vehicles, whether it is biofuels, batteries, natural gas, or something entirely different.

Markets shift to more efficient and cost-competitive technologies when they make economic sense and meet consumer preferences. In the 1800s, wood was the dominant energy source for families because it was abundant and convenient. Over time, coal replaced wood because it provided more heat per pound and was easier to store and to transport.

Furthermore, the evolution of rail power from steam to diesel occurred even faster because the transition significantly reduced costs and increased productivity. Though legislation encouraged the use of diesel locomotives on a small scale, the dramatic shift mostly happened because of market forces. The cost-effectiveness and increased productivity of diesel-powered trains largely eradicated the use of steam locomotives in just over two decades.

The reality is that Washington isn’t needed to drive energy innovation, which is a difficult pill to swallow for some politicians and special interests. Because those are the folks who want to keep the money flowing to their preferred energy sources because they stand to benefit.

It’s more difficult for politicians to take credit for the successes guided by the invisible hand. But the free market will actually trigger successful investments and reward disruptive technologies, providing more choice and better options for families.

On the surface, their reasons for government funding energy projects may sound appealing to the public. For years, policymakers stressed the need to develop alternative energy sources to reduce dependence on foreign energy sources. Lately, the justification for Department of Energy spending is that America needs to combat global warming, reduce greenhouse gas emission, and be a leader in green tech.

But intentions and results are two very different things. Decades of the federal government trying to commercialize specific energy technologies have left Americans with nothing more than empty promises and squandered money.

Instead of continuing to fund energy programs almost without hesitation, policymakers should trust that the market will determine the true value of potentially innovative technologies. We know what works and what doesn’t. It’s time for Congress to stop dumping money into failed programs and expecting different results. Instead, they should live by this mantra: