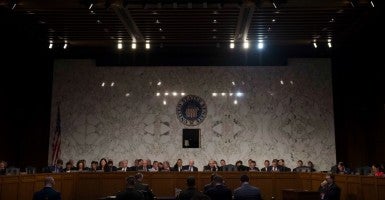 No wonder so many Americans on the left and right are disgusted and fed up with career Washington bureaucrats and insiders. Common sense ideas which folks outside the beltway understand and take for granted are hard to come by inside the beltway.

Exhibit A is the novel idea—to the Army, Air Force, and some key Senate staffers who don’t know better—that military prosecutors and defense lawyers should be experienced litigators, just like their civilian counterparts in every district attorney and public defender office in the country.

Give credit to Sen. Joni Ernst, R-Iowa, for proposing an amendment that would have required the services to establish career litigation tracks for select few JAGs so that they could deliver first-class justice to crime victims and defendants alike in the military.

But behind closed doors, outside the view of the public, her amendment was knee capped by professional bureaucrats in true Washington fashion. What emerged is an amendment that requires the services to carry out a “pilot program” on military justice to study the “feasibility and advisability of a military justice career track for judge advocates” (read: Conduct studies indefinitely).

To make matters worse, the “pilot program” is five years long, which means that the status quo—no career litigation tracks—lasts for at least five more years. And if any member of congress brought up the idea of career track legislation in the next five years, the services would simply push back and say that they are “studying” the “feasibility and advisability” of such a program per statute.

Given the fact that the Army and Air Force has vehemently opposed a real amendment requiring a career litigation track for judge advocates, and given the fact that non-litigator former Air Force and other JAGs who are now key staffers on the Committee on Armed Services, is there any surprise that the common sense Ernst amendment was gutted?

And you can put money on the outcome of the Army and Air Force JAG “report” after five long years of study—they will say they don’t need a career track.

The fact is the status quo is not good enough, and this makes matters worse.

In concluding our three part series of posts on why congress should require the Army and Air Force JAG Corps to establish a career litigation track for judge advocates (JAGs) and rebut their complaint that a career track would disrupt and change the way they practice law.

We agree, and think that much-needed change is a strength not a weakness. In fact, maintaining the status quo, pretending to have career litigators in practice but not form only undermines the level of experience and competency that victims and defendants in the military deserve.

Despite the best efforts at all echelons of the Judge Advocate General’s (JAG) Corps, the Army’s military justice system continues to suffer from a lack of litigation experience. Army Prosecutors and defense counsel are routinely sent into court with little meaningful experience and without the benefit of a seasoned practitioner to guide them through the process. This lack of experience often results in substandard litigation and poor professional development of junior judge advocates. The Army JAG Corps’ failure to adequately address this problem has exacerbated the issue by creating a perpetual cycle of inexperienced supervisors advising inexperienced litigators on how to try very serious cases.

And as Major Gilberg points out in footnote 4 of his article, his opinion is not new, as it has been written about before by other Major Bankson, Brigadier General Cooke, Majors Hayden, Hunter and Wilkins, Lieutenant Colonel Holland, Major McManus, Colonel Charles N. Pede, and me, among others.

The Air Force JAG Corps complains that the proposal to levy a statutory requirement for a criminal law track, akin to the Navy JAG Corps, does not account for their unique structure, mission, and organizational demands that are vastly different from the Navy’s structure and construct. They are making a full court press on the hill with congressmen who used to serve in the Air Force to reject the career track.

What the Army, Air Force, and key Senate staffers purposefully ignore is the fact that the original Ernst amendment fully respected the unique structure, mission and organizational demands of each service. It did not, nor should it, tell the service how to implement a career track, and indeed contemplates that each service will study how best to craft the track itself given its unique qualities. It provided ample time for each service to study the ramifications and potential collateral consequences of carving out a career litigation track—all the while requiring them to implement a career track.

In short, the legislation focused on a simple goal—requiring the services to organically grow career JAG litigators—and leaves virtually all the details to the services themselves to figure out.

The reality is that Major Gilberg and we are correct regarding the state of litigation experience and competence in the Army and Air Force JAG Corps. The Navy’s track is by no means perfect, and could benefit from increased specialization by establishing a prosecutor-only and defense-only sub-specialization, but they are light years (9 years to be exact) ahead of their sister services.

Given the intransigence of the Army and Air Force JAG Corps and key Senate staffers, the House of Representatives needs to step in require the services to do what every district attorney, public defender and Navy has done—create a career litigation track for select JAGs.

Here’s to hoping that a bi-partisan group of House members channels the common sense found outside the beltway and stands behind the idea of a career track for select judge advocates.

Once the Army and Air Force are required to do so, they will reluctantly comply. And over time, they will find that the track is necessary, flexible, and changes the way they practice law for the better. And twenty years from now, some young Army officer will write a law review article entitled, “What Took The Army JAG Corps So Long To Establish Career Litigation Tracks?”