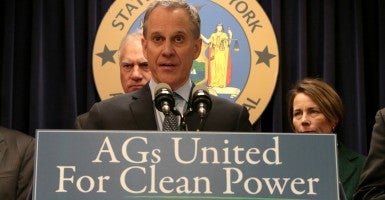 The Competitive Enterprise Institute (CEI) has launched a fierce counter-attack against Claude Walker, the attorney general for the Virgin Islands, who recently served a subpoena on CEI demanding documents related to CEI’s research on global “climate change.”

On April 20, CEI’s attorney, Andrew Grossman, filed a long and extensive objection to the subpoena and made it clear that CEI will not comply with it. Grossman, a lawyer at BakerHostetler and co-founder of the Free Speech in Science Project, told Walker in his cover letter that the attorney general’s legal action targeting CEI is “a blatant attempt to intimidate and harass an organization for advancing views that you oppose.”

The only reason to try to force CEI to turn over its internal research and documents on this issue is “to punish [CEI] for its public policy views, chill its associations, and silence its advocacy.”

Grossman cites Walker’s own statements at the press conference held by AGs United for Clean Power on March 29 to show that Walker launched this investigation to achieve political ends, not “carry out any law enforcement duty.”

Walker said his investigation was intended to “make it clear to our residents as well as the American people that we have to do something transformational” about climate change, stop “rely[ing] on fossil fuels,” and “look at reliable energy.” As Grossman says, Walker is entitled to his opinions on public policy, but Walker doesn’t have a right to wield his “power as a prosecutor to advance a policy agenda by persecuting those who disagree with” Walker.

The objection filed by Grossman on behalf of CEI not only points out the constitutional problems with Walker’s investigation, but some crucial procedural mistakes made by Walker. For example, Walker didn’t actually get a court in the Virgin Islands to issue the subpoena; he simply issued it himself.

Subpoenas that are not issued by a “court of record” and that are not part of a “pending judicial action” cannot be domesticated in another jurisdiction like the District of Columbia where CEI is located and was served with the subpoena. This is the type of basic error that one might expect from a young law firm associate, not the attorney general of a U.S. protectorate.

But more fundamentally, CEI is objecting on First Amendment grounds, citing to court cases prohibiting the compelled disclosure of the type of information and documents that Walker is trying to obtain. Grossman claims that the subpoena “violates the First Amendment because it constitutes an attempt to silence and intimidate, as well as retaliate against, speech espousing a particular viewpoint with which the Attorney General disagrees.”

CEI asserts that the subpoena is also “invalid because the underlying investigation is pretextual, is being undertaken in bad faith, is intended as a fishing expedition, and is in support of an investigation of charges that have no likelihood of success.”

In what may be a sign of the involvement of the plaintiffs’ bar in pushing these climate change persecutions in the same way it helped instigate the massive tobacco industry litigation, CEI says the subpoena is invalid and violates the Fifth and 14th Amendments because Walker has delegated “investigative and prosecutorial authority to private parties.”

CEI is referring to the fact that Walker’s subpoena was handled by a private law firm in Washington, D.C., Cohen Milstein Sellers & Toll, which has been called one of the “most feared plaintiffs’ firms” in the country. The firm itself brags about being the “most effective law firm in the United States for lawsuits with a strong social and political component” (emphasis added).

CEI says that Walker’s investigation “could result in penalties available only to government prosecutors.” Thus, delegating “investigative and prosecutorial authority to a private attorney, Ms. Linda Singer, and a private law firm, Cohen Milstein Sellers & Toll PLLC, that are most likely being compensated on a contingency-fee basis, violates due process of law.”

That raises a very interesting question about “AGs United for Clean Power”—are they hiring private firms like Cohen Milstein on a contingency basis to target climate change deniers?

CEI’s objection also claims that Walker, Singer, and the Cohen Milstein firm may be subject to sanctions for violating a local court rule in the District of Columbia that required them to “take reasonable steps to avoid imposing undue burden or expense” on CEI, and that this broad, burdensome subpoena “plainly violates that duty given its facial invalidity, astonishing overbreadth, and evident purpose of imposing unwarranted and illegitimate burdens on CEI and CEI’s exercise of its constitutional rights.”

CEI says that Walker, Singer, and the firm “violated their ethical obligations” under a D.C. Bar Rule that prohibits an attorney from “knowingly us[ing] methods of obtaining evidence that violate the legal rights of” a third party.

CEI’s attorney concludes his letter to Walker by calling him (and all of the other attorneys general involved in this climate change cartel) out in very plain spoken terms:

Your demand on CEI is offensive, it is un-American, it is unlawful, and it will not stand.

He gives Walker a warning and a choice: “You can either withdraw [the subpoena] or expect to fight … the law does not allow government officials to violate Americans’ civil rights with impunity.”