IRS Can Track Your Cell Phone, but Leaves Billions in Taxes Uncollected 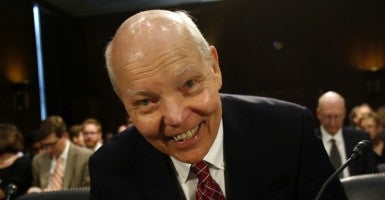 Critics complain that under Commissioner John Koskinen, the IRS has bolstered domestic surveillance capabilities even as a "tax gap" remains. (Photo: Yuri Gripas/Reuters/Newscom)

While the Internal Revenue Service continues to leave uncollected tax money on the table, the agency beefed up its surveillance capabilities in a move that alarms both conservative and liberal privacy advocates.

Now some complain the IRS is acting too much like Big Brother and not enough like a traditional taxman.

Since 2006, the IRS has overseen an annual tax gap—the shortfall between taxes owed and collected—of about $385 billion, government analysts say. And according to an April report, the agency has not implemented 70 of 112 actions identified by the Government Accountability Office to close that loop.

In 2009, though, the IRS purchased a “cell-site simulator,” more commonly known as Stingray technology. And since November, the agency has been trying to buy another of the devices.

Like something from a spy movie, a Stingray device mimics a cellphone tower, tricking all mobile phones in an area into revealing their location and numbers. Authorities can deploy the powerful technology to tag and track an individual’s location in real time.

More advanced versions of the devices can be used to copy information stored on a cellphone and to download malware remotely.

The devices are as controversial as they are prevalent. According to the American Civil Liberties Union, 61 agencies in 23 states and the District of Columbia own the devices.

IRS Commissioner John Koskinen says the IRS uses its Stingray to hunt down fraudsters and stop money laundering. The agency’s use of the devices remained a secret until an October report in the Guardian.

In a November letter to House Oversight Chairman Jason Chaffetz, R-Utah, Koskinen wrote that the agency’s technology “cannot be used to intercept the content of real-time communications” such as voicemails, text messages, and emails. Instead, the IRS chief said, the device has been used “to track 37 phone numbers.”

And the IRS commissioner insists his agency deploys the tech only in accordance with state and federal laws.

But during an April 13 hearing of the Oversight and Government Reform Committee, the deputy IRS commissioner for service and enforcement, John Dalrymple, couldn’t say whether the IRS obtained a warrant before activating the device.

With a federal budget deficit projected at $544 billion in 2016, Jordan told The Daily Signal he’d rather have the IRS focus on “their fundamental job, which is to collect revenue due to the federal Treasury.”  He added:

The GAO has 112 things they suggest, recommendations for the IRS to actually deal with the $385 billion dollar tax gap. Not one of those recommendations was to purchase a second Stingray unit.

More than a misappropriation of resources, the chairman of the House Freedom Caucus said, he fears the IRS could abuse the technology to monitor political groups like it did in 2013, when the agency began targeting conservative nonprofits.

“Now you have this same agency, who again for a long period of time went after people for exercising their First Amendment free speech rights, are using this technology and without a Fourth Amendment probable cause warrant,” Jordan said.

Nathan Wessler, an attorney with the American Civil Liberties Union, said the technology poses a significant threat even when gathering basic information like names and numbers. In an interview with The Daily Signal, Wessler said Stingray devices could be “quite chilling on people’s right to protest.”

And there’s already a precedent for misconduct, albeit at a more local level.

Wessler points to a 2003 incident when the Miami-Dade Police Department purchased a Stingray device to monitor a protest of a conference on the Free Trade Area of the Americas. According to an expense report obtained by the ACLU, police wanted the device because they “anticipated criminal activities.”

“It’s a pretty short step from those words to being concerned about the police intentionally downloading a list of every protester who shows up at some demonstration,” Wessler said. “It’s a powerful way to know who’s there.”

The IRS Criminal Investigations Division is already one of the more elite investigative agencies. Koskinen boasts that in 2015 the division achieved a 93.2 percent conviction rate, “the highest in all of federal law enforcement.”

It’s an open question whether the agency needs Stingray technology to complete its mission.

The IRS did not respond to The Daily Signal’s requests for comment made by emails and phone calls.

There is no good reason the IRS would ever need real-time data information. The crimes that the IRS investigates all occurred in the past. They’re investigating fraud against the government that’s already happened. They don’t have crimes in progress like a burglary.

But if the IRS ever needed to track a suspect in the moment, Larkin said, there’s a practical solution—teamwork. He explains that there’s “no legal hurdle” that prohibits the IRS from teaming up, for instance, with the Department of Justice and borrowing its Stingray technology.

Jordan says he isn’t ready to accept that the IRS ever needs access to the device.

“Really, should the IRS have this and be using this at all?” the Ohio Republican said. “I tend to think you’d be better off with this technology not being in their hands.”