North Korea May Be Preparing Another Nuclear Test 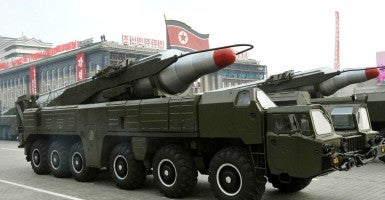 The Obama administration has still not sanctioned a single North Korean human rights violator two years after the U.N. determined the regime had committed crimes against humanity. (Photo: KCNA/EPA/Newscom)

South Korea announced that it is monitoring increased activity indicative of another nuclear test at North Korea’s Punggyi nuclear test site. The South Korean Ministry of Defense commented that Pyongyang has the capability to conduct its fifth nuclear test anytime. It is expected the test would occur before the important North Korean Workers’ Party Congress–the first in 36 years–scheduled for next month.

North Korean leader Kim Jong-un seems intent on proving his nuclear and missile prowess. Pyongyang conducted its fourth nuclear test in January and a test launch of its Taepo Dong ICBM in February. The regime subsequently released unprecedented information on the nuclear warhead, the reentry vehicle, the solid-fueled second stage, and improved liquid-fueled first stage of the road-mobile KN-08 ICBM.

While some pundits dismiss a North Korean nuclear capability as still several years away, U.S. and South Korean officials have commented that Pyongyang has developed nuclear weapons for its No Dong MRBM that would threaten Japan and South Korea. Moreover, the U.S. commanders of PACOM, NORAD, and U.S. Forces Korea last year stated their belief that Pyongyang had the ability to target the continental United States with a nuclear ICBM. The test revealed the KN-08 first stage uses Musudan rather than No Dong engines, along with a more capable fuel. That means the KN-08 would be able to reach throughout the U.S., including New York City and Washington, rather than only the Pacific Northwest.

Secretary of State John Kerry vowed, “It is still possible we will ratchet up [the pressure] even more” if North Korea conducts another nuclear test. Rather than showing resolve, the statement instead reveals the Obama administration continues to pursue a policy of timid incrementalism, holding back measures for the next North Korea violation.

In February, the U.S. Congress passed the North Korean Sanctions and Policy Enforcement Act, in part due to bipartisan and bicameral frustration with the Obama Administration’s limited actions in response to North Korean provocations. Congress made enforcement of some U.S. laws mandatory rather than discretionary to induce stronger administration action.

In March, President Obama issued a new executive order which commendably expanded and enhanced U.S. ability to punish North Korean violators and third-party entities providing assistance. However, while the text is impressive and ominous-sounding in its powers, as was the case with all previous executive orders on North Korea, its effectiveness ultimately depends on how strongly it is actually implemented.

The executive order’s accompanying list of newly sanctioned entities was underwhelming. It did not include a single North Korean entity involved in human rights violations, cyber, or censorship. The Obama administration has still not sanctioned a single North Korean human rights violator two years after the U.N. determined the regime had committed crimes against humanity.

Also absent from the sanctions list were any entities from outside North Korea. The Obama administration has been reluctant to go after Chinese entities that facilitate prohibited North Korean activity. Only by applying secondary sanctions on non-North Korean entities, including those in China, will U.S. targeted financial measures be fully effective.