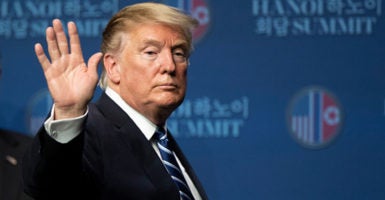 No deal is better than a bad deal, a leading North Korean expert said of President Donald Trump’s walking away early from the summit in Vietnam with North Korea’s dictator.

“President Trump walked away from the opportunity to reach a flashy but poorly crafted deal with North Korean leader Kim Jong Un,” Bruce Klingner, a senior research fellow on Northeast Asia at The Heritage Foundation, who has been critical of Trump administration policy toward the communist regime, said.

“For that he is to be commended,” Klingner said of Trump. “For weeks, the administration hinted it might lower the bar on required North Korean actions to remedy the regime’s defiance of numerous U.N. resolutions. Media reporting even suggested the parameters of the likely agreement.”

Kim insisted the U.S. scrap economic sanctions on his nation without taking far-reaching steps to denuclearize. The Hanoi meeting was the second meeting between the two leaders, who met in Singapore last year.

“Sometimes you have to walk,” Trump told reporters in Hanoi afterward, with Secretary of State Mike Pompeo at his side.

North Korea wanted to see the U.S.-led international sanctions against the communist regime end in exchange for the shuttering of its Yongbyon nuclear facility, the president said.

“They wanted the sanctions lifted in their entirety, and we couldn’t do that,” Trump said. “They were willing to denuke a large portion of the areas that we wanted, but we couldn’t give up all of the sanctions for that.”

Trump said the two leaders would continue to talk.

“I’d much rather do it right than do it fast,” he said.

White House press secretary Sarah Huckabee Sanders called the meeting “very good and constructive,” adding: “No agreement was reached at this time, but their respective teams look forward to meeting in the future.”

“As the dust settles, all parties, including America’s allies, will ponder their next steps,” Klingner said. “Now is not the time for rash behavior, neither escalatory threats nor an eagerness to offer more concessions to bridge the evidently large gap between the U.S. and North Korean positions.”

Washington should emphasize that the negotiating focus must be on denuclearization, upholding U.N. resolutions and U.S. laws against North Korean violations and defending allies while resisting the siren call of prematurely declaring peace or lowering sanctions prior to reducing the multifaceted North Korean threat. President Trump did that in Hanoi.