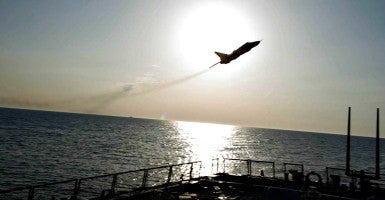 KYIV, Ukraine—As the NATO-Russia Council prepared to meet for the first time in almost two years, U.S. and Russian officials traded barbs over who’s to blame for a recent spike in military tensions.

The ambassadorial level meeting set for Wednesday at alliance headquarters in Brussels was to be the first time the format, which comprises NATO and Russian officials, has been convened since June 2014.

Looming over the talks are provocative Russian warplane intercepts. These include a pair of Russian Su-24 fighter jets that buzzed within 30 feet of the USS Donald Cook in the Baltic Sea on April 11 and 12, and a Su-27 fighter jet that performed a barrel roll within 50 feet of a U.S. RC-135 spy plane April 14.

“These kinds of planned maneuvers are especially dangerous because they bring us very close to an unplanned accident,” a former Soviet fighter pilot told The Daily Signal.

The U.S. and NATO say Russia has demonstrated a pattern of military aggression and reckless brinksmanship across Eastern Europe that risks sparking a military conflict.

“It was definitely done on purpose, and with the NATO summit in mind,” Oleksiy Melnyk, a former Ukrainian air force lieutenant colonel who served as a fighter pilot in the Soviet air force, said of the aerial antics by the Russian jets in an interview with The Daily Signal.

“Having the same background, I’m sure the pilots were not too young and too stupid to realize that these kinds of maneuvers would create an international scandal,” said Melnyk, now co-director of foreign relations and international security programs at the Razumkov Centre, a Ukrainian think tank.

Beginning in 1986, Melnyk flew Mig-21s for the USSR. He said the intent of the recent Russian intercepts was likely twofold: To send a diplomatic message to NATO that the Baltics are Russian turf and to test NATO’s military responses.

Russia’s current pattern of intercepting NATO ships and aircraft is “more aggressive and more frequent” than what the Soviet Union authorized pilots to perform during the Cold War, Melnyk said.

Under Soviet rules of engagement governing intercepts of NATO aircraft, the recent actions would have been forbidden, he said.

Soviet rules governing air intercepts were tightened after the 1983 incident in which Soviet fighter jets shot down a Korean Air Lines 747. Melnyk described this month’s Russian intercepts as “reckless,” and said Soviet pilots would have been punished for such maneuvers if commanders had not approved them beforehand:

Underscoring the strain on U.S.-Russian relations after the USS Donald Cook incident, U.S. Secretary of State John Kerry said the American ship could have fired on the Russian jets.

“It is reckless. It is provocative. It is dangerous. And under the rules of engagement, that could have been a shoot-down,” Kerry said in an interview with CNN Espanol.

Russia’s Defense Ministry claimed the U.S. version of the incident was “not consistent with reality” and that the Russian warplanes had “performed strictly in accordance with the international regulations on the use of airspace.” A senior Obama administration official told The Daily Signal in an email that Wednesday’s NATO-Russia Council meeting “does not indicate a return to business as usual between NATO and Russia.” The official added:

As a direct result of Russia’s actions in Ukraine, NATO decided to suspend all practical civilian and military cooperation with Russia. However, NATO also decided to keep political channels of communication open at the ambassadorial level and above. This meeting is consistent with that policy.

According to NATO, the meeting was to focus on the Ukraine conflict as well as the security situation in Afghanistan.

The meeting comes as fighting in eastern Ukraine continues to escalate in periodic bursts, threatening a complete collapse of the tenuous Minsk II peace accord.

More than 9,200 Ukrainians have died in the conflict, according to the United Nations.

Also on the docket: improved communications between NATO and Russia to prevent incidents such as the air intercepts from sparking a conflict.

Russia has shown a pattern of provocative actions in Eastern Europe, particularly in the Baltics, for more than two years. These include the alleged abduction of an Estonian intelligence officer on Estonian soil in 2014.

In July 2015, NATO officials reported the alliance had scrambled warplanes to intercept Russian aircraft more than at any time since the end of the Cold War. And according to U.S. Navy officials, Russian submarine activity in the North Atlantic now matches, and may even exceed, Cold War levels.

Since 2014, the U.S. has boosted its military presence in Eastern Europe to reassure its allies. Troops and warplanes have rotated among NATO countries across the region, and an ongoing exercise to train and equip Ukraine’s armed forces began in summer 2015. Ukraine is not a NATO member state. However, four NATO countries—Canada, Lithuania, Poland, and the U.S.—currently have troops in western Ukraine to train the nation’s military.

In 2014 the White House launched the European Resistance Initiative, pledging $1 billion to bolster U.S. military forces in Europe as a response to Russia’s military aggression in Ukraine.

Recognizing the long-term security threat Russia poses to the region, the White House included $3.4 billion in its 2017 defense budget for the European Reassurance Initiative—a fourfold increase over the $789 million tagged the previous year.

The funds finance more U.S. troops in the region, military exercises with allies, and construction of new infrastructure to house troops and store weapons and military hardware.

The U.S. buildup is intended to shore up confidence among NATO’s eastern members on the reliability of American support; it’s also a strategic deployment of troops and equipment to defend against a Russian attack.

In March 2015, a U.S. Army Stryker convoy traveled 1,100 miles through the Baltic states and across Eastern Europe on an operation called Dragoon Ride.

Dragoon Ride was touted as a public relations event to reassure allies about U.S. commitment to defend the region.

U.S. troops on the convoy, however, said a secondary objective was to scout routes and analyze road conditions for the rapid deployment of armor across the Baltics in the event of a Russian invasion. NATO’s beefed-up military posture along its eastern frontier dates in part from a September 2014 summit in Wales, during which NATO pledged to stockpile supplies and forward-deploy troops in Eastern Europe to repel a Russian attack.

The Obama administration’s defense budget follows through on that initiative, tagging funds to permanently deploy a full armored combat brigade to the region.

Additionally, 250 tanks, heavy artillery, and armored personnel carriers will be stockpiled across the region.

Even with the increased U.S. presence, NATO’s Baltic states remain vulnerable to a Russian attack. A recent report by the RAND Corporation, a U.S. think tank, concluded that Russian forces could invade to the edge of Estonia’s capital of Tallinn or the Latvian capital of Riga in 36 to 60 hours.

“As currently postured, NATO cannot successfully defend the territory of its most exposed members,” the report said.

The report added that NATO needs seven combat brigades, including three heavy armored brigades, supported with airpower to “prevent the rapid overrun of the Baltic states.”

The Kremlin has called the U.S. plan for a rotating combat brigade in Eastern Europe a violation of NATO’s pledge not to forward-deploy troops on the alliance’s eastern frontier.

In the Russian Founding Act of 1997, NATO pledged not to station a “substantial” numbers of troops or deploy nuclear weapons among new member states from the former Warsaw Pact.

At the time, Russia criticized the deal for not setting a specific numerical limit on troop numbers. Now, Washington and Moscow are mincing words over whether a U.S. buildup in Eastern Europe would constitute a “substantial” increase in troops.

“We see an unprecedented military buildup since the end of the Cold War and the presence of NATO on the so-called eastern flank of the alliance with the goal of exerting military and political pressure on Russia for containing it,” Russian Foreign Minister Sergey Lavrov said April 14, according to the Russian news agency TASS.

What NATO has done when it comes to reinforcement of our collective defense is defensive; it is proportionate and it is a direct response to what we have seen of Russian aggressive behavior in Ukraine.