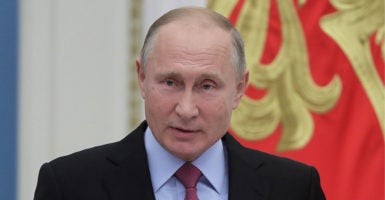 Anybody in the inner circle of Russian strongman Vladimir Putin who might have cheered President Donald Trump’s victory in 2016 must now be sorely disappointed.

When it comes to dealing with Russia, Trump has been the toughest president since Ronald Reagan. He has sent advanced weapons to the Ukrainians and Georgians, increased U.S. defense spending in Europe, enlarged NATO, kicked out scores of Russian diplomats, and recently announced that the U.S. will withdraw from the Intermediate-Range Nuclear Forces Treaty.

But perhaps Trump’s biggest impact has been with economic sanctions. He has slapped them on more than 200 Russian oligarchs and senior government officials and dozens of Russian organizations and companies.

These measures strike at the kleptocratic heart of Putin’s inner circle—and they are starting to bite. How do we know? Because Russian companies under U.S. sanctions are trying to find creative ways of getting off the sanctions list.

Leading the charge is Russian aluminum giant Rusal, owned by Putin crony Oleg Deripaska. In August, Treasury Secretary Steven T. Mnuchin implied that sanctions against Rusal could be lifted if Deripaska, who is personally sanctioned by the U.S. government, shows he is no longer the company’s majority shareholder.

Several days after Mnuchin’s comments, Deripaska’s team of attorneys submitted a plan to the Office of Foreign Assets Control, the division inside the Treasury Department that would decide whether he actually has ceded control of the company.

Last week, Rusal missed a deadline to show that it had satisfactorily restructured its ownership to meet U.S. concerns. Astonishingly, instead of saying “Sorry, too little, too late” to Deripaska and his attorneys, Treasury gave them more time to make their case.

This is an incredibly high-profile case, and Treasury’s wobbliness has led other Russian companies to believe they can also restructure their ownership to get off the U.S. sanctions list, too.

Last week, it was announced that Russian oligarch Viktor Vekselberg, who owns the Renova Group—a massive conglomerate with business interests in the energy, construction and telecommunications sectors—was going to appeal to the Office of Foreign Assets Control to lift the sanctions put on him and his business interests.

If the office lifts sanctions on Rusal or the Renova Group, it would be the first crack in the sanctions regime since the Obama administration introduced it 2014. It would send the wrong signals to friend and foe alike.

Letting the likes of Deripaska and Vekselberg off the hook because of their dubious “business restructuring” gambit would set an army of Russian lawyers to working overtime to get other firms off the sanctions list, too.

Many of America’s allies in Europe are watching what the Treasury does, too. Sadly, some of them with uncomfortably close relations with Moscow are looking for the first excuse to reduce their sanctions against Russia. The Treasury should not become that first excuse.

At the end of the day, as massive Russian companies with global interests, Rusal and the Renova Group should remain sanctioned even if their respective owners give up all control. After all, in the case of Rusal, the aluminum it produces has helped build the Russian war machine we are seeing in action in places like Ukraine and Syria. So it hardly matters if Deripaska has a controlling stake or not.

It should come as no surprise that Russian companies are trying to get off the sanctions list. Russian companies, like companies around the world, have a responsibility to their shareholders to deliver profits. Obviously, being on the U.S. sanctions list is bad for business. However, the administration needs to realize that it, too, has a responsibility to its shareholders—the American people.

Until Russia changes its behavior on the international stage—stops occupying Crimea, ends its support for Syrian dictator Bashar Assad, and stops its support of separatists in eastern Ukraine—it remains in America’s interest to keep the sanctions in place.