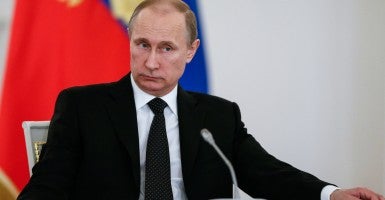 Ministers from European Union countries decided last week to work strategically to counter Russian’s propaganda offensive in Ukraine and other former Soviet states. EU countries intend to collaborate on broadcasting to give citizens in the target countries, e.g. the Baltics, an alternative to the relentless bombardment of Russian media, which produces a highly distorted version of the news aimed at Russian speakers.

At the meeting in Brussels, ministers tasked foreign affairs chief Federica Mogherini with creating a strategic plan for an integrated media campaign by June. Also, the European Endowment for Democracy, funded by the EU, is to present proposals at a summit in Latvia on May 21-22. This is to be attended by representatives from Ukraine and other neighbors of Russia.

The United States government has taken similar steps to increase broadcasting as a result of Russia’s annexation of the Ukrainian peninsula of Crimea in March 2014 and its continued support of rebel movements in Eastern Ukraine. Last October, Radio Free Europe/Radio Liberty, in collaboration with Voice of America, launched a news program aimed at countries bordering Russia. The 30-minute long, Russian language “Nastoyashchee Vremya,” or “Current Time,” is carried by television channels and Internet portals in Latvia, Lithuania, Moldova, Ukraine and Georgia.

The aggressiveness of Russia’s propaganda offensive has alarmed politicians in the West, and both European and American broadcasters unfortunately are playing catch-up. Ignoring evidence of the Kremlin’s emerging propaganda strategy, state-funded international broadcasters both in the United States and Europe previously all but eliminated radio broadcasting in Russian, Ukrainian, Georgian and other critical languages. The motives were budget cuts and a focus on new media. They were nonetheless short-sighted from a strategic point of view.

Accordingly, the U.S. broadcasters, Voice of America and Radio Free Europe/Radio Liberty, the British BBC, the German Deutche Welle, etc., have not been able to counter the avalanche of well-funded broadcasting from Russia. The global television network Russia Today and the propaganda website Russia Direct are closely supervised and nurtured by the Kremlin. Russia Today now broadcasts in five languages.

It will be necessary to deal with the challenge from Russian propaganda strategically and collaboratively, both in Europe and across the Atlantic. Nobody needs to imitate Russia’s propaganda offensive, though. The success of the West in the Cold War with truthful news and information to audiences behind the Iron Curtain shows the way forward.