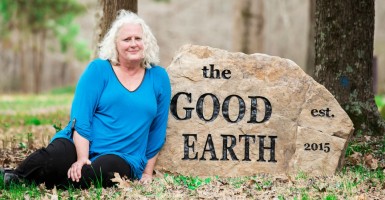 In the summer of 2015, Shelia Champion bought some land in Hazel Green, Ala., hoping to turn it into an environmentally friendly cemetery where members of her community could purchase natural shrouds, caskets, and graves for their loved ones.

However, she quickly found that licensing laws would put a damper on the business that became her passion.

The entrepreneur said her interest in funerals started with her mother’s death.

“I had a phobia about this up until the time I was 50 years old and my mother died, and I had to make myself see her, you know go to the funeral home,” she said, “and then this overwhelming sense of peace came over me and I started realizing that dead people aren’t going to be anything gross or scary. So that started me on the path of wanting to do something along the lines of funerals and death care.”

But when she looked into selling caskets, Champion found that it was illegal. Alabama law only allowed licensed funeral directors to sell them. She said she dropped it at first.

“Then my father died … six years ago, and so I went through the same thing again,” she said. “His funeral was identical to my mother’s and it cost $12,500, which just blows me away.”

After that, she said she started to think about funerals again, and this time she decided to build Good Earth LLC, a green cemetery in Hazel Green.

“And now it’s become my passion,” she added.

“I was a hospice volunteer for a year, and sitting with hospice patients also pushed me along this path a little better because they want to be home to die. So why would you want to be home to die, but then be whisked away to a strange place and have a stranger bathe you, embalm you, dress you, put makeup on you, and put you on display?” she told The Daily Signal.

Champion explained that green burials are unique because they involve entirely biodegradable materials such as wool, linen, or cotton and wooden or cardboard caskets. The funeral is also special, she said, because family takes care of the their deceased loved ones, rather than a funeral home. She said the natural burial materials are also much cheaper and better for the environment than traditional caskets and funeral home embalmings.

Earlier this month Champion filed suit with the District Court for the Northern District of Alabama, Northern Division to challenge the law.

“I think the bottom line in this case is that Alabama requires a license to sell a cardboard box,” Champion’s attorney Renée Flaherty of the Institute for Justice, a nonprofit law firm, told The Daily Signal.

“You know, it’s kind of ridiculous, Shelia’s, what she’s selling is very simple and inexpensive, and you know she’s not able … to sell a cardboard box without a license,” Flaherty added.

In 2013, the Institute for Justice won a similar case in Louisiana where monks had to obtain a license in order to sell handmade wooden caskets.

Flaherty said that in the Louisiana case, the 5th Circuit Court of Appeals found the Louisiana licensing law unconstitutional because it had been implemented to protect licensed funeral directors from competition, which is not a legitimate government interest.

Flaherty said Champion’s case could take a year or more to play out, but she is prepared to take it all the way if need be.

“We’re willing to take [this case] all the way to the United States Supreme Court if we have to because this case touches on a really important issue that the federal courts are in disagreement about,” she said, “and that is, whether laws like this that their only purpose is to protect private financial interests, in this case the licensed funeral directors, whether that kind of economic protectionism is a legitimate interest of government.”

“What the people all over the United States and Alabama need to do is pay more attention to the laws that are being passed,” Champion said, “the ridiculous laws that protect the funeral directors, funeral homes, and have nothing to do with the good of the people.”

“So I’m on a mission to educate people as to what their rights are at the end of life as well as ways that they can honor their loved ones and spend less money.”