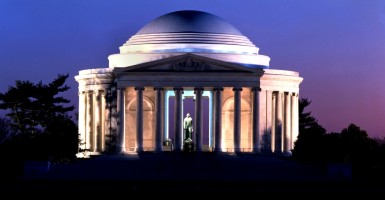 America would probably not have remained a nation committed to constitutional limits on the federal power without Jefferson’s herculean efforts to establish a political movement in defense of such limits. (Photo: Flickr/ IIP Photo Archive/CC BY-NC 2.0) 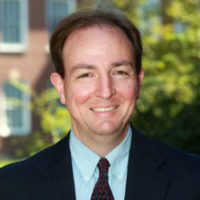 Thomas Jefferson was born 273 years ago today. It is fitting that we should use his birthday not only as an occasion of celebration, expressing our gratitude for his life, but also for reflection, trying to understand his massive contribution to our country’s history and development.

Jefferson is beyond dispute one of the most important of the American founders and, even more, one of the most important Americans of any generation. He was born into an utterly different world from ours. He was born in the colony of Virginia—one piece of the British Empire in North America. As one of the leading proponents of and architects of American independence, he became a key figure in the creation of the new world into which we have been born—a world in which America is a self-governing nation, committed to the defense of the natural rights of each individual.

This reference to natural rights as the object of government calls to mind one of Jefferson’s proudest achievements: His authorship of the Declaration of Independence, which not only asserted America’s decision to cut its political ties with Britain but also explained the doctrine of natural rights on the basis of which this decision could be justified, and on the basis of which America intended to create its own governing institutions.

Jefferson is famous, of course, as the country’s third president. Nevertheless, he apparently rated his role in crafting the Declaration as a more important contribution. He planned his own tombstone, which omits reference to his presidency but instead proclaims his authorship of the Declaration and of the Virginia Statute for Religious Liberty, as well as his status as founder of the University of Virginia.

Although Jefferson is justly famous for his role in securing and declaring America’s independence, his deeds and words here do not bring home to us his distinctive contribution to our country’s political culture. After all, in the end, all of the founders were committed to American independence and to government on the basis of natural rights. Jefferson himself admitted as much when he claimed later that the Declaration included nothing novel, but was intended to give expression to the American mind.

Jefferson’s unique contribution to America can be found instead in his vigorous defense of limited government under the Constitution. Responding to the political program of his great rival, Alexander Hamilton, Jefferson emerged in the 1790s as the new nation’s leading proponent of a federal government understood to be strictly limited by the enumerated powers bestowed by the Constitution.

Hamilton thought the young republic needed an energetic exercise of the federal government’s powers in order for it to develop into a great nation, but Jefferson instead argued for a government of narrow responsibilities that would leave most of the work of government to be done by the states.

Sometimes Jefferson went too far. His narrow interpretation of the Necessary and Proper Clause—which would limit the implied powers of the government to those measures without which the enumerated powers would fail to be executed at all—was rejected by a unanimous Supreme Court in McCulloch v. Maryland (1819) and has never been resurrected.

We should not, however, allow Jefferson’s occasional excesses to diminish our respect for his general contribution. In all fairness to Hamilton, America would probably have not grown into a great power without an energetic exercise of the federal power.

But in fairness to Jefferson, America would probably not have remained a nation committed to constitutional limits on the federal power without Jefferson’s herculean efforts to establish a political movement in defense of such limits.

The heirs of the Jeffersonian persuasion—such as the Tea Party today—are carriers of an essential element of America’s political identity and are necessary to the preservation of our government as not only energetic, but also constitutionally limited.