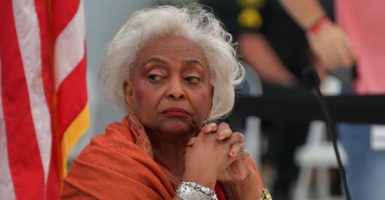 “There was no way as governor that I was going to let her preside over another election down there after all the problems that they had,” Florida Gov.-elect Ron DeSantis says of Broward County Election Supervisor Brenda Snipes. (Photo: SMG/ZUMA Press/Newscom)

Republican Florida Gov.-elect Ron DeSantis appeared on “Fox & Friends” Monday to applaud the resignation of Broward County Election Supervisor Brenda Snipes and said there was “no way as governor that [he] was going to let her preside over another election.”

“Obviously we’re going to have to address some of the problems with the election administration in places like Broward and Palm Beach County,” DeSantis said.

“I think it’s good that Brenda Snipes has submitted her resignation.”

DeSantis claimed he would not have let Snipes continue under his administration and said she “dropped the ball” during the statewide recount.

“There was no way as governor that I was going to let her preside over another election down there after all the problems that they had,” he continued. “So we had 65 counties do a good job. We had two that dropped the ball. We want to make sure all 67 counties do these elections in a fair way.”

Snipes could have faced an “embarrassing suspension from office at the hands of either Gov. Rick Scott or his likely successor, Ron DeSantis,” according to Politico.

Host Ainsley Earhardt asked DeSantis what the next step in the process is and he said either he or outgoing Republican Gov. Rick Scott would appoint her replacement after she officially leaves office.

“It depends on when her resignation is effective. I heard it was going to be effective sometime in early January, about the time I’m being sworn in. So, yeah, then that will fall to me to appoint her replacement. If she has resigned immediately, then Gov. Scott would have a window to appoint it before he leaves office,” DeSantis said.