8 Questions for PayPal on Its Decision to Boycott North Carolina 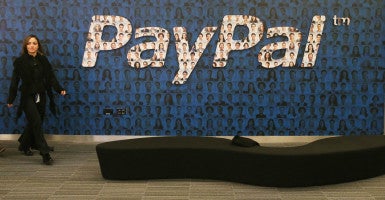 A staff member at a PayPal branch in Ireland. Dan Schulman, PayPal's president and CEO, says the company won't expand in North Carolina because of a new law. (Photo: Niall Carson/ZUMA Press/Newscom)

On Tuesday, you announced that PayPal, where you are the president and CEO, was no longer going to open a new operations center in Charlotte, N.C., because “legislation has been abruptly enacted by the state of North Carolina that invalidates protections of the rights of lesbian, gay, bisexual, and transgender citizens and denies these members of our community equal rights under the law.”

I have a few questions for you about PayPal’s decision.

I look forward to your responses. Because right now, it seems as though PayPal has decided it’s siding with extreme activists—and opposing those who believe that men shouldn’t be able to enter women’s bathrooms.