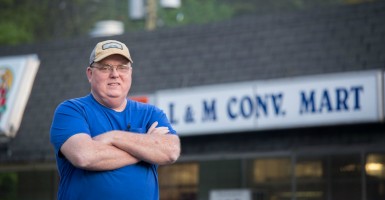 After months of sleepless nights since having more than $107,700 seized by the Internal Revenue Service, L&M Convenience Mart owner Lyndon McLellan learned yesterday the government decided to dismiss the case that lost him his money.

“It’s a relief to know that you’re getting something back that’s yours to start with,” McLellan told The Daily Signal. “I wanted [the government] to do what was right, and I felt what was right was for me to get my money back.”

“It’s a relief to know that you’re getting something back that’s yours to start with,” said Lyndon McLellan.

According to documents filed with the U.S. District Court for the Eastern District of North Carolina yesterday, U.S. Attorney Thomas Walker cited changes to the Department of Justice’s policy regarding civil asset forfeiture made in March as the reason for dropping the lawsuit against the $107,702.66 seized from McLellan’s bank account in July.

“We’re thrilled that the government has recognized that what they were doing to Lyndon was wrong and that they’ve dropped the attempt to forfeit Lyndon’s money,” Robert Johnson, a lawyer at the Institute for Justice who represents McLellan, told The Daily Signal. “This case was a mistake and unconstitutional from the start, and we’re just glad the government has recognized that.”

However, Johnson said it could be months before the government returns the money.

McLellan owns L&M Convenience Mart in Fairmont, N.C., a restaurant and store that opened in 2001. Last year, the Internal Revenue Service seized all of the money in the store’s bank account—$107,702.66—after accusing McLellan of committing structuring violations.

McLellan, though, was never charged with a crime.

The Daily Signal reported on McLellan’s fight to get his money back on Monday.

Structuring involves making consistent cash deposits of less than $10,000 into a bank account for the purpose of avoiding reporting requirements. The procedure began as a way to combat money laundering and drug trafficking. However, more and more instances have come to light where innocent Americans have committed structuring violations without knowing it.

Under a subset of civil asset forfeiture laws that regulates cash deposits, the government can seize money from those accused of structuring violations, as it did in McLellan’s case.

Though the government will return all of the money it seized from McLellan, it dismissed the case without covering the store owner’s legal fees and expenses, as well as interest on the money.

In 2000, Congress passed a law that entitles McLellan to those fees and expenses, which total more than $20,000.

Additionally, government policies require the $107,702 seized is kept in an interest-bearing account. Though McLellan will receive the money, the government wants to keep the interest earned.

Johnson told The Daily Signal he will fight to ensure McLellan has legal fees, expenses and interest repaid.

“Ultimately, the important thing is Lyndon is getting his money back. The government is doing the right thing. But at the same time, the government needs to make Lyndon whole,” said Robert Johnson of @IJ.

“Ultimately, the important thing is Lyndon is getting his money back. The government is doing the right thing,” he said. “But at the same time, the government needs to make Lyndon whole.”

“They came into his store and turned his life upside down, caused him all kinds of heartache and expense, and now they’re just trying to walk away as if nothing happened and forcing Lyndon to bear all those costs,” Johnson continued. “It wasn’t right to begin with, and Lyndon shouldn’t be the one left holding the bag at the end of the day.”

In court filings, Walker stated that though the policy change is not retroactive, the government would no longer pursue the case.